Roman and Greek-style were major influences on Byzantine style architecture. It began with Constantine the Great’s rebuilding of Byzantium and renamed it Constantinople, as well as his construction of churches and the Constantine Forums.

The History of Byzantines and Byzantine Empire Architecture 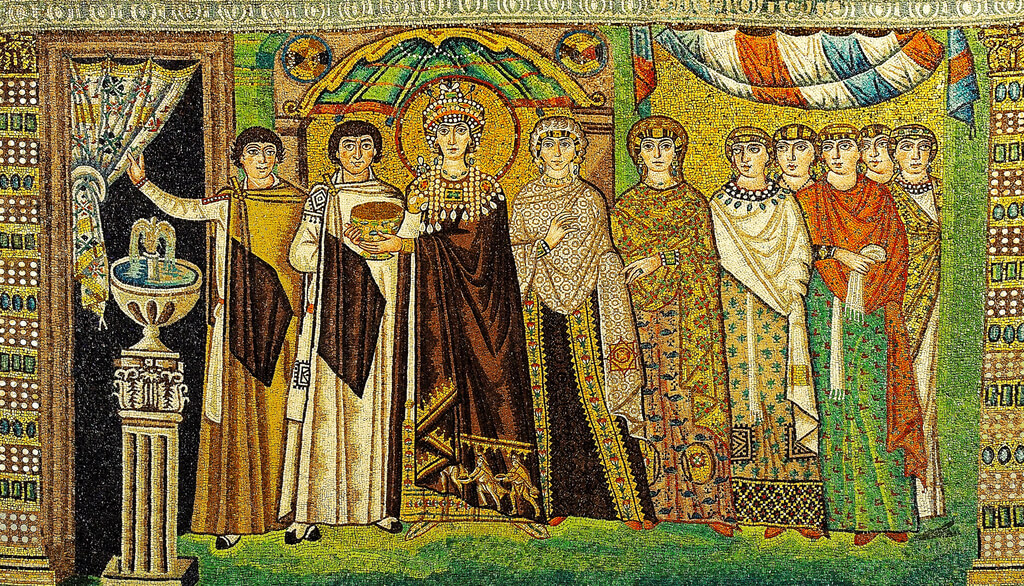 The Byzantines were the last remains of the Eastern region of the Roman Empire, which lasted from the fifth century to the decline of Constantinople in 1453 CE. Many individuals, on the other hand, dismiss the label “Byzantine” and simply refer to them as “Romans.”

The Byzantines and the Romans had a lot in common. They had a similar political order and cultural norms, and they were both powerful nations in their own eras. Even the Byzantine kings called themselves Romans, and the word “Byzantine Empire” didn’t appear until much later, after the empire had fallen in 1453. 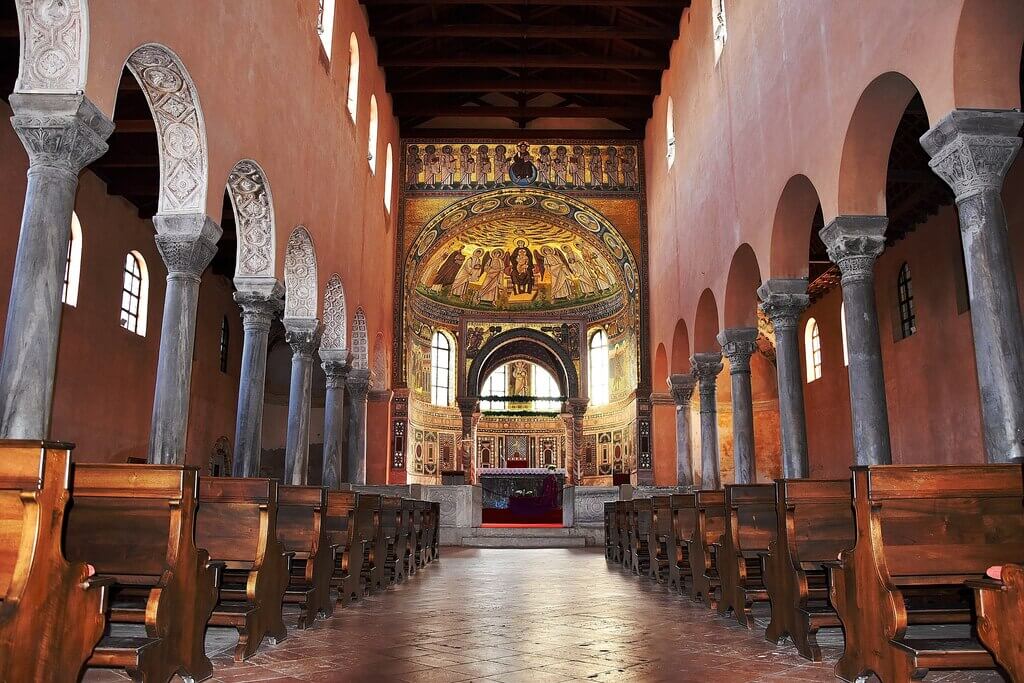 Early Byzantine architecture was influenced by Roman architectural characteristics. The Greek cross plan in the architectural style of church evolved over time as a result of stylistic deviation, technological improvement, and political and social changes.

The majority of the surviving structures are religious in origin, with secular constructions largely known through contemporary accounts.

The interiors of Churches in the Early Byzantine era were decorated with iconography and mosaics, among other things. The centered cross-in-square layout and greater embellishment on church facades and interior decoration became the hallmark of Byzantine architecture throughout the Middle Byzantine era.

Few marked characteristics of the architectural style of the Byzantine era are: 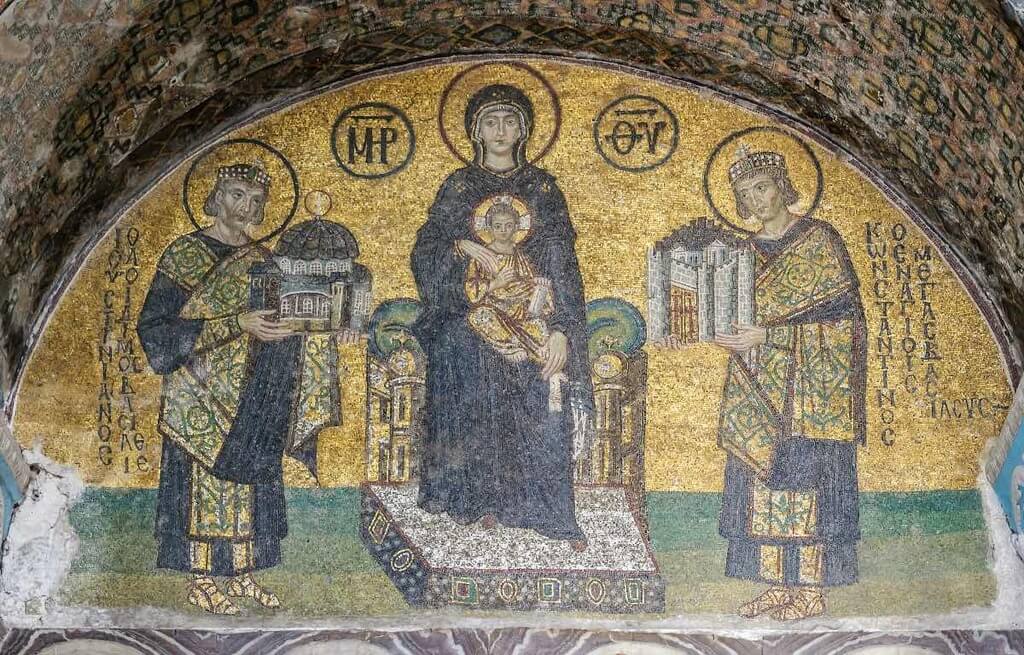 Mosaics are the most prevalent uniting feature in Byzantine art and architecture. Mosaics depicted religious subjects as well as significant historical characters. Many churches from this era have Byzantine mosaics on their ceilings and walls.

Mosaics were constructed by Byzantine artisans not only for the Byzantines but also for the Venetians and the Norman Kings of Sicily, who erected many houses of worship. 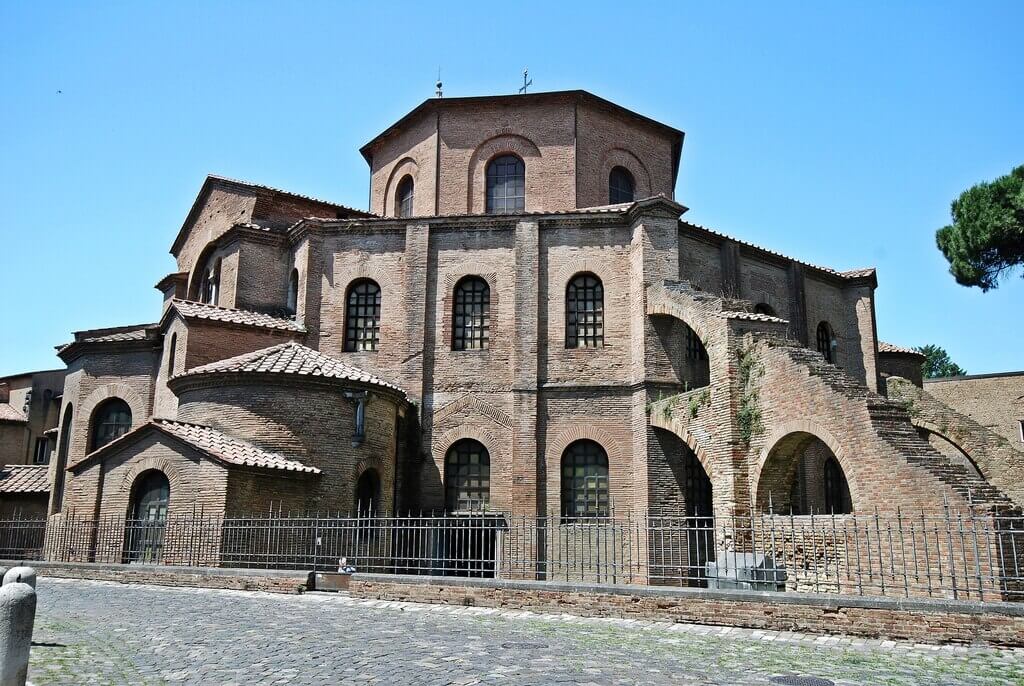 After the decline of the Western Roman Empire, the round arches that were popular among the Ancient Romans remained a prominent element in Byzantine architecture.  The Basilica of San Vitale includes rounded arch openings and buttresses on the façade.

The Byzantine empire architecture employed round arches for the great majority of their construction openings, and they continued to do so even after most of Europe had embraced the pointed Gothic Arches. 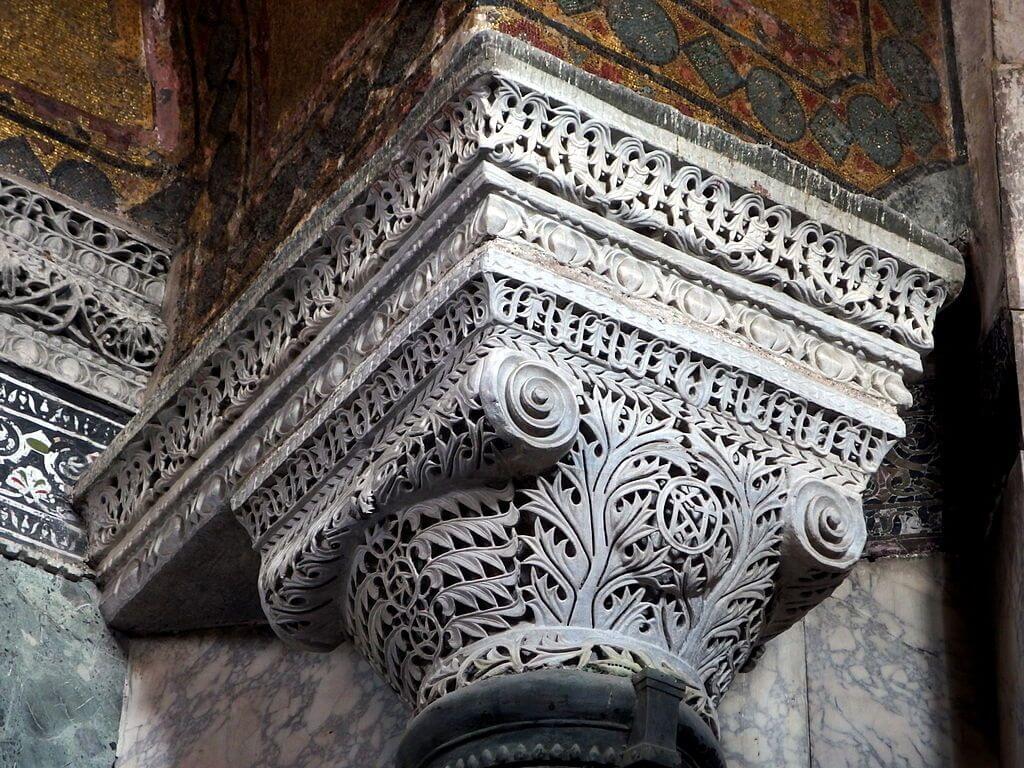 The evolution of Byzantine architecture was influenced greatly by Classical Greek and Roman architecture, which had been existing for millennia. Column capitals, which all emerged from the ancient three types of Greek columns: the Doric, Ionic, and Corinthian, may be seen in abundance in many Byzantine structures. 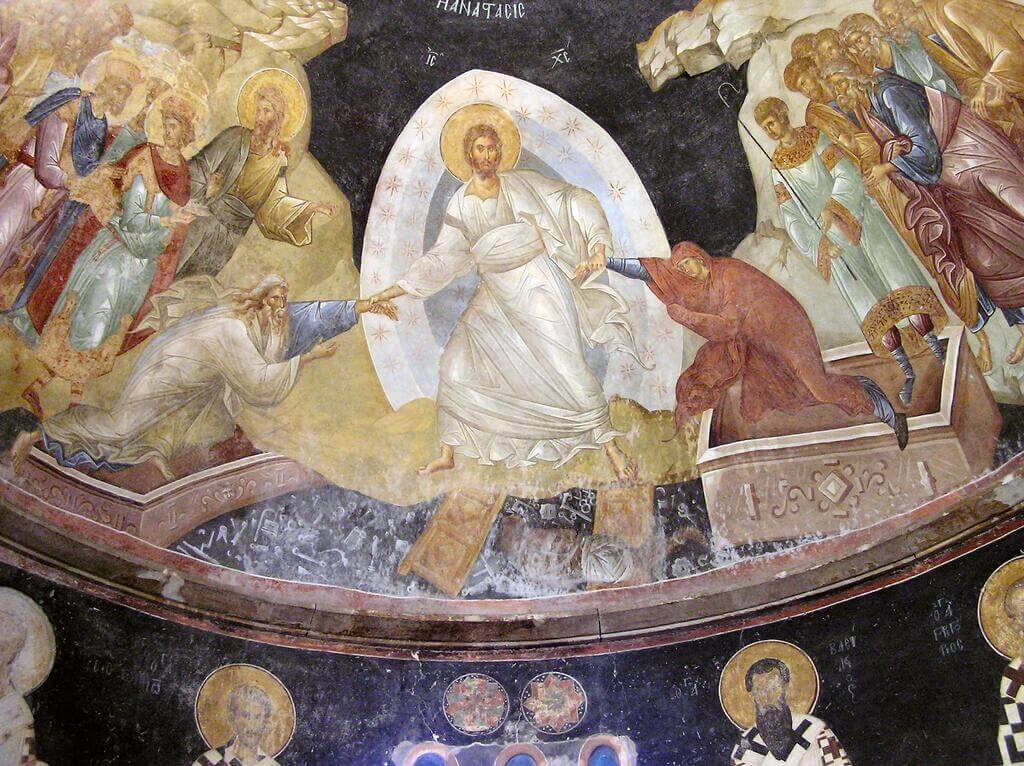 Like the Ancient Romans, the Byzantines were skilled builders. They built great structures across their kingdom and beyond. They pioneered new construction methods, aesthetics, and technologies. Byzantine architecture reflects the empire’s might and demonstrates that much of the globe was still skilled and imaginative even during the dark ages.

Here is a list of 10 architectural wonders that seek to highlight some of the best, most original, and stunning examples of Byzantine architecture 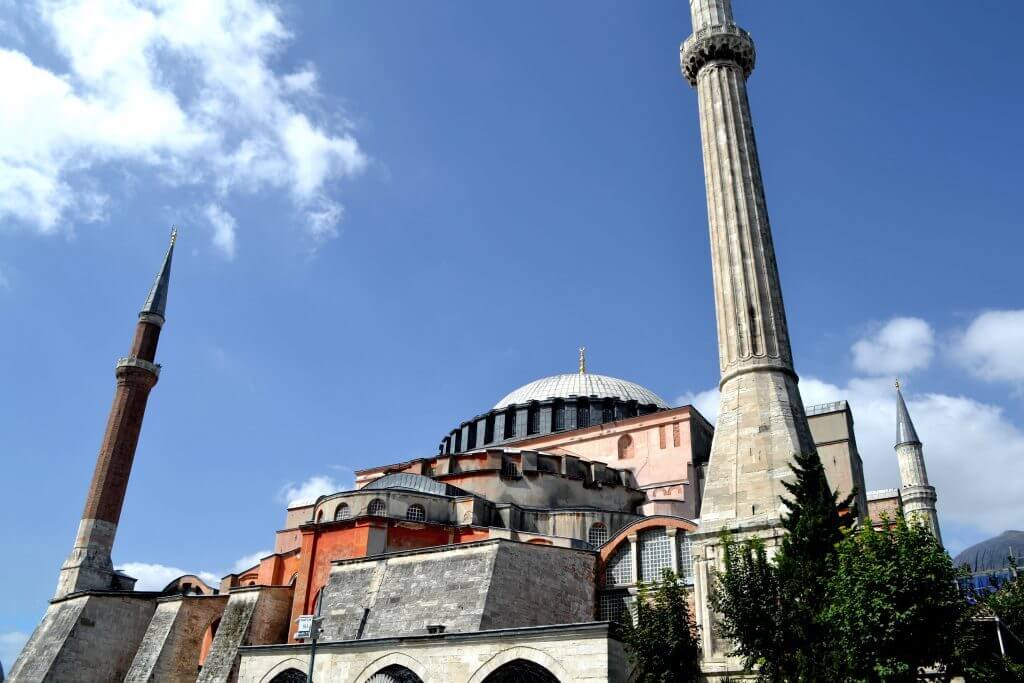 The Hagia Sophia is the world’s most important masterpiece of Byzantine architecture. The most astonishing feature of this structure is that it was built in just 5 years and 10 months.  Not only was the church constructed in such a short amount of time, but it was also the world’s biggest structure at the time it was built.

The Hagia Sophia’s Dome is especially spectacular. It was the world’s biggest dome during the time of its completion, overtaking the Pantheon’s dome housed in Rome. 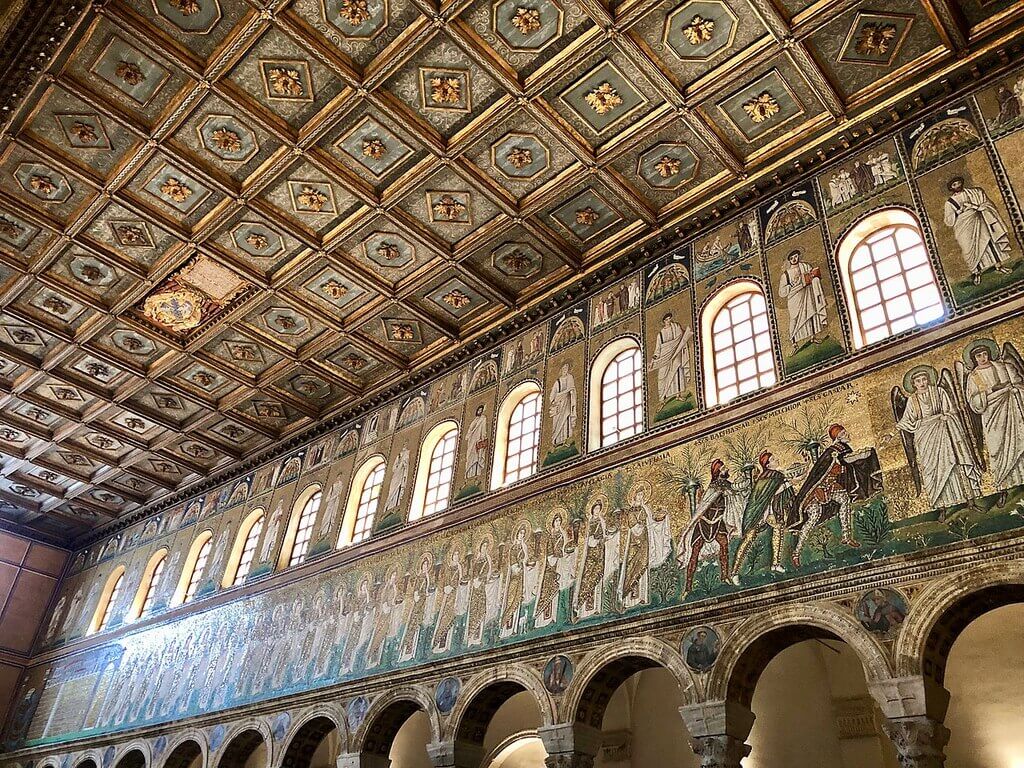 In 540 CE, the Byzantines captured Ravenna and immediately declared it their local capital on Italian land. Even though the basilica was created by the Ostrogoth ruler, it was nonetheless significantly influenced by Byzantine empire architecture, and most of the mosaics were produced by Byzantine Craftsmen.

The church’s layout is based on an old Roman basilica’s classic linear layout, with a lengthy central nave bordered by two parallel chambers. The church’s Byzantine mosaics are among the best-preserved examples remaining in existence. They portray biblical subjects as well as prominent Ravenna locations. 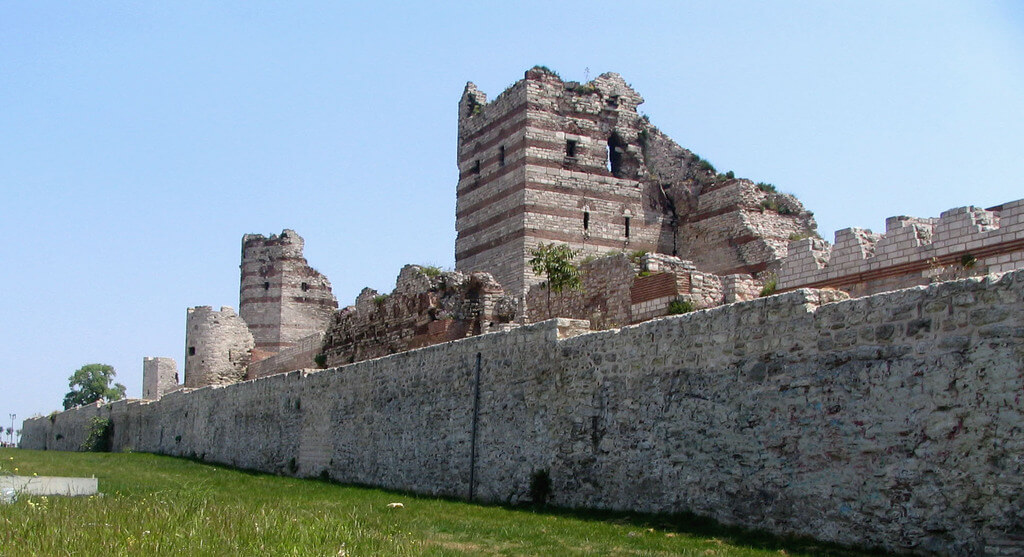 The final significant fortification structure of antiquity was Constantinople’s walls. They were continually updated over time, but Constantine the Great completed the major buildings in the fourth century.

The walls encircled the city, forming a great land barrier on the western boundary and a smaller but still powerful sea wall around the city’s other three borders.

The western wall was a vast three-tiered structure of walls, towers, and moats that was an architectural wonder. Theodosian Walls are the name given to these walls, which are still mostly intact today. 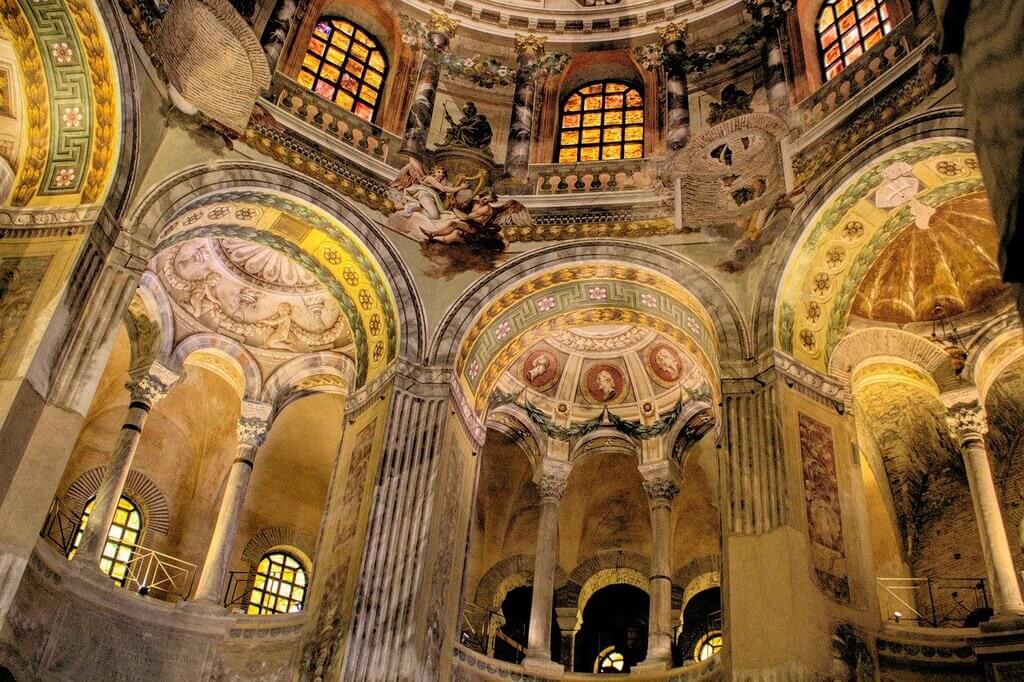 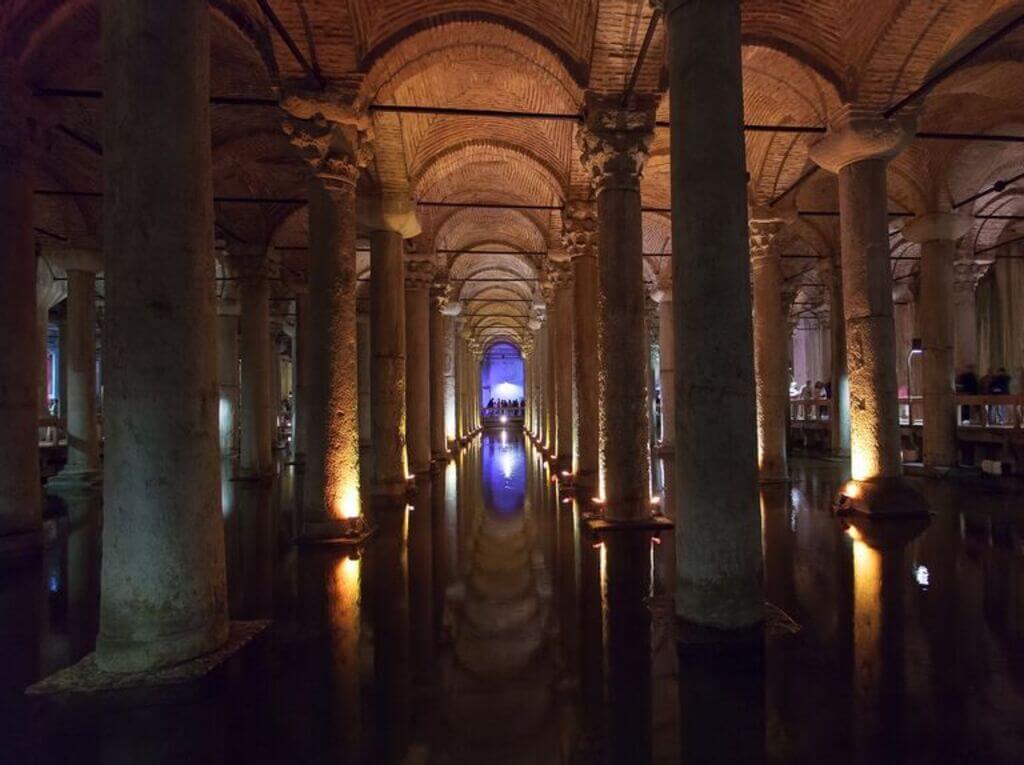 While wandering around the neighbourhoods of Istanbul immediately outside the Hagia Sophia, one wouldn’t see a gigantic subterranean water storage tank beneath their feet. Because of its closeness to an earlier basilica, this cistern is known as the Basilica Cistern.

It is a fantastic example of Byzantine architecture and urban design. The enclosed chamber is genuinely large, holding 2,800,000 cubic feet of water equivalent to 32 Olympic-size pools. There are 336 marble columns inside the cistern, some of which are ornately carved and include column capitals, medusa heads, and intricate decorations.

6. The Heptapyrgion and Walls of Thessaloniki, Greece 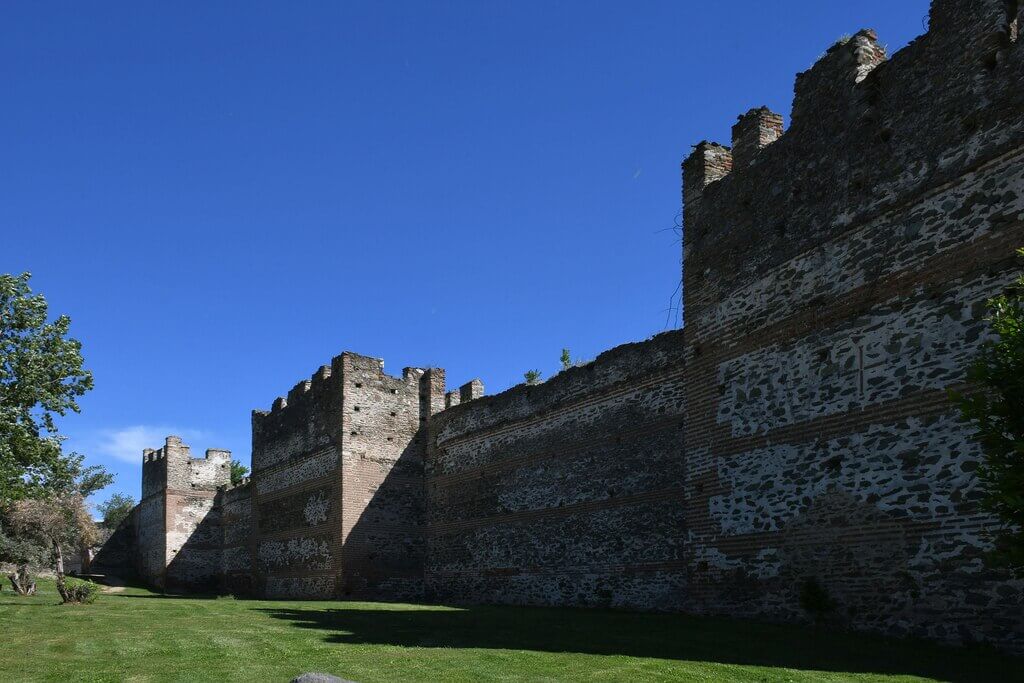 During the Byzantine Empire, Thessaloniki was a powerful city. It was a major seaport with a powerful defence system that rivalled that of Constantinople, the capital of Byzantine. These walls were mostly constructed during Theodosius I’s rule, circa 390 CE. Many of the walls have been built and changed over the years.

The walls started around the Heptapyrgion and went all the way down to the bay. The Heptapyrgion was a fortress-like structure that served as the city’s primary defensive fortification.

7. Basilica of Saint’Apollinare in Classe, Italy

Saint’Apollinare in Classe is architecturally identical to its sister Saint’Apollinare Nuovo. The church from Byzantine architecture has a linear design in the Rome Basilica style, with the aisles and nave all heading towards the altar.

The apse, which is beautifully adorned with Byzantine mosaics, is the most important section of the church.

8. Monastery of the Panocrator, Turkey 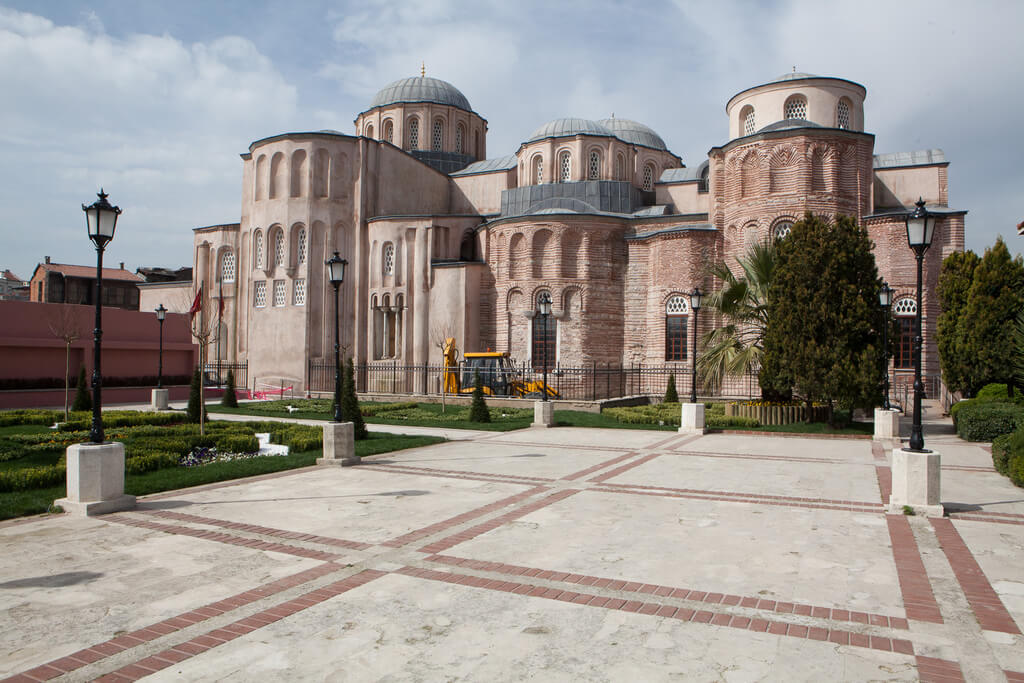 The Pantocrator Monastery is the second-largest Byzantine holy structure still standing in Istanbul. The Monastery consists of two different churches and a little chapel. All of these structures are made of bricks, with mortar joints that are substantially broader than the bricks.

This method was common in Byzantine architecture during this time period, and it may be seen in a variety of structures throughout Anatolia, Greece, and the Balkans. 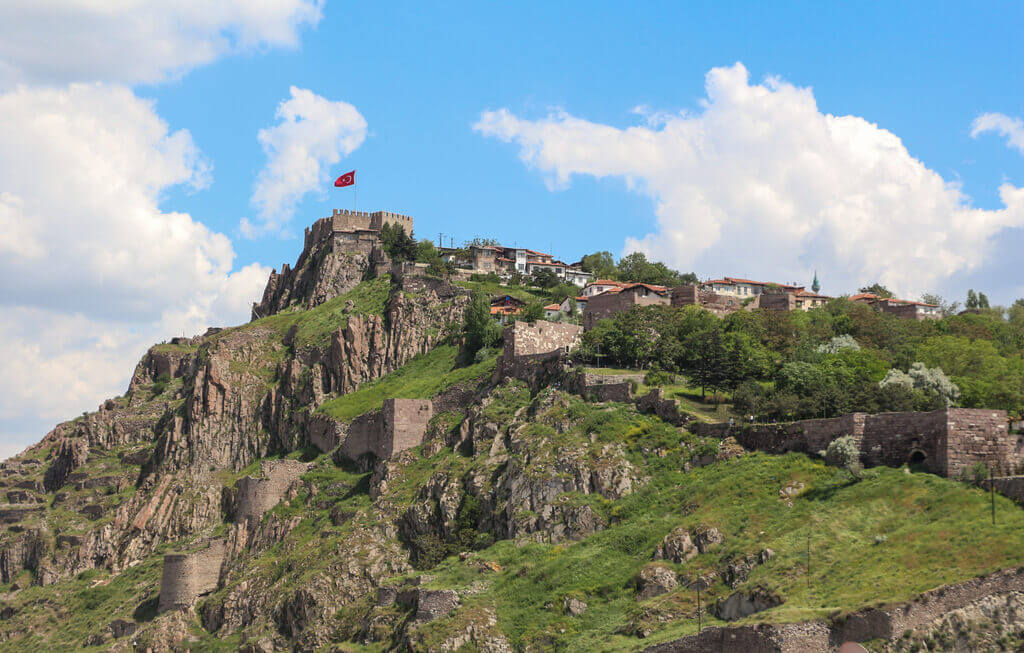 Ankara Castle is a massive hilltop fort in Turkey’s modern capital, Ankara. The castle is situated in the middle of the ancient city, on a high elevation with panoramic views of the entire region.

The fortress was erected by the Byzantines to help safeguard the eastern limits of their empire and is a classic example of military structure from the historical era.

10. Our Lady of Saidnaya Monastery, Syria 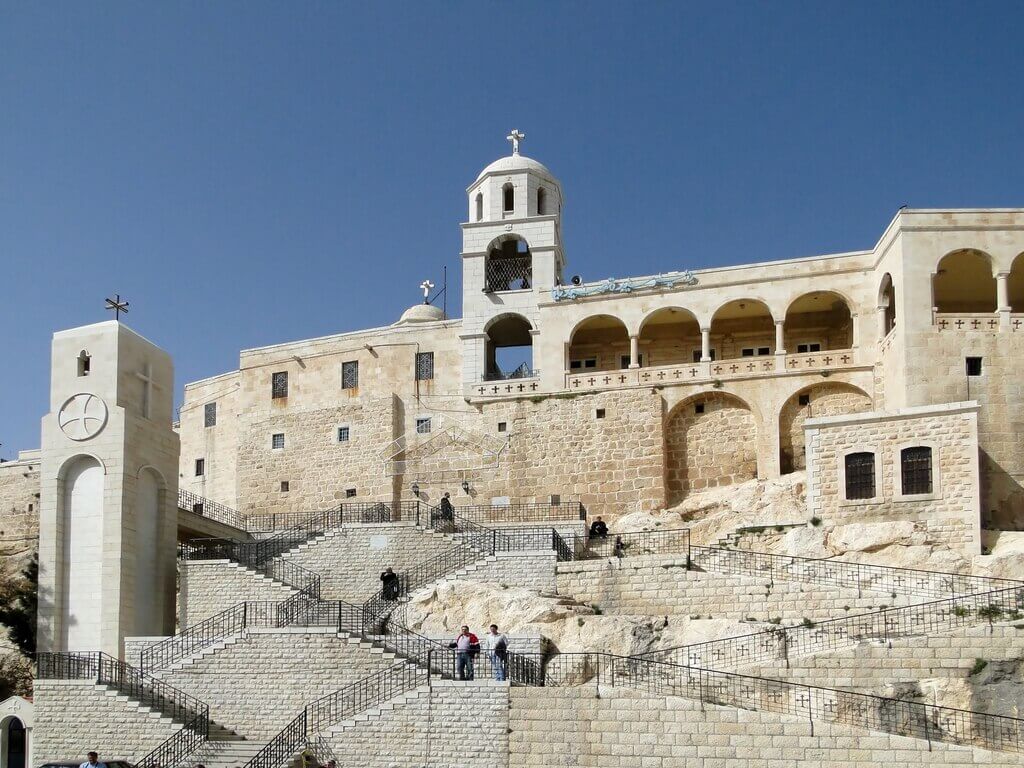 Despite the Byzantine administration of Syria being brief in comparison to their dominance of modern-day Greece and Turkey, the Byzantines were nevertheless able to produce a number of magnificent works of art in the country. The Our Lady of Saidnaya Monastery is one of Syria’s most magnificent specimens of Byzantine architecture.

The Sophisticated Byzantine Art and Architecture 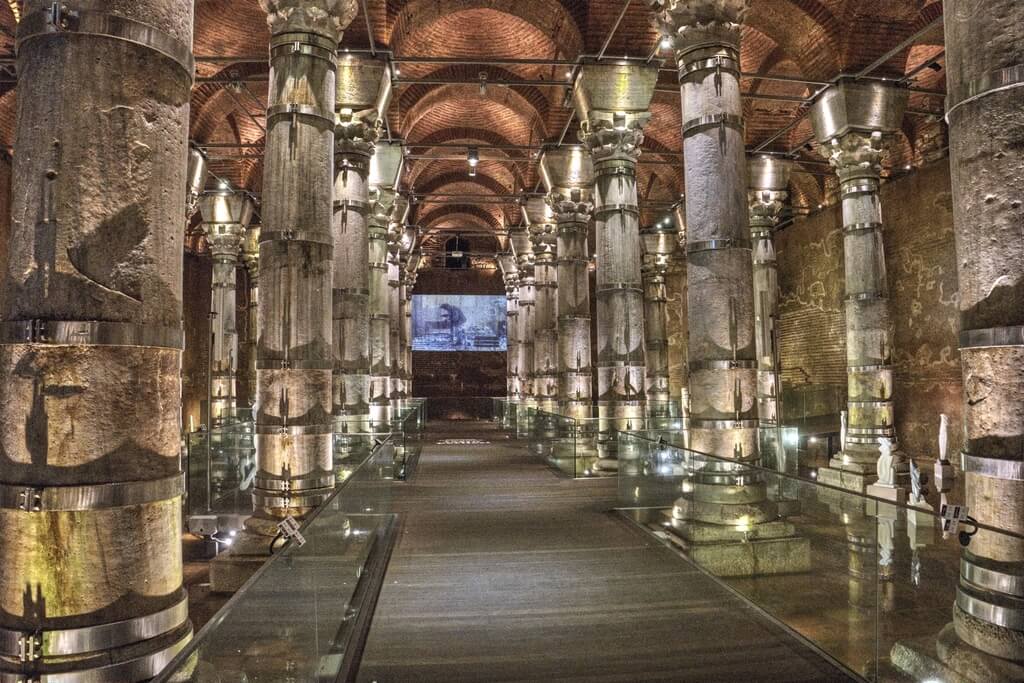 Today, specimens of Byzantine architecture may be seen all throughout the globe. Modern architecture would be quite different if it weren’t for the Byzantine Empire’s prosperity and the masterpieces it left behind. The Byzantines were an outstanding culture that revolutionized the world of architecture.