No city is like New York. As an amalgam of different cultures, it is one of the most diverse in the world. New York is also facing social and environmental challenges that range from the need for new housing and transportation demands, to rising sea levels and storm surges. As the global pandemic further underlined the importance of design in shaping public life, city officials and planners are looking at a range of approaches and models for urban development and renewed growth. 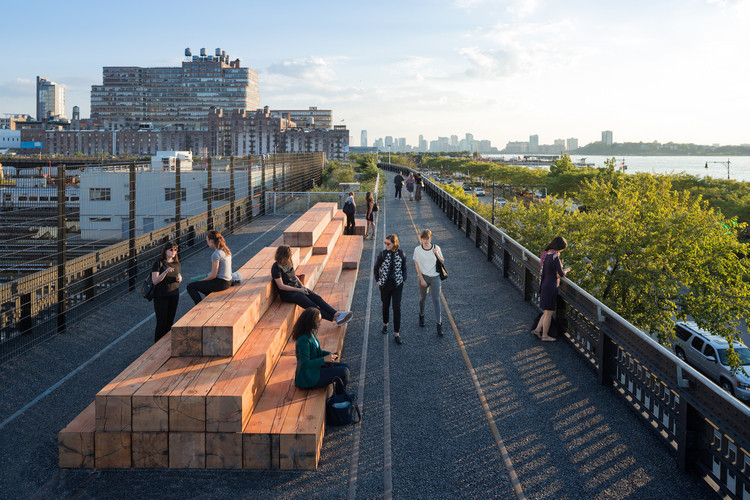 From Penn Station to Coney Island, New York is facing widespread change. Responding to the theme of Cities and Living Trends, the following articles, projects and editorials look at development across New York’s five boroughs as a responses to coastline conditions, affordable housing, and integrated rail networks. Together, they are a snapshot of the city as it looks to better understand how design can inform and shape how we live. In turn, they give a glimpse into the ways that New York is investing in new projects across both private and public work.

The Daniel Patrick Moynihan Train Hall, named for the visionary United States senator who proposed the project in the 1990s, opened its doors on January 1 to New Yorkers and travelers from the Long Island Rail Road, Amtrak, the New York City Subway, and the entire northeast region. Moynihan Train Hall expands the Pennsylvania Station complex with a 225,000-square-foot rail hub in the landmark James A. Farley Post Office Building.

The new, online NYC Climate Dashboard confirms that New York City is not doing enough to meet its climate goals. What’s worse, the goals don’t measure up to the challenge citizens face. A growing consensus among scientists says the world has only until the end of this decade to avert catastrophic climate change. Here in New York, the biggest contributions to greenhouse gasses come from buildings and driving. As an architect and urban designer, John Massengale shares what he believes the world is missing and some significant changes that the world can make for the sake of future generations.

Little Island is a public park that shelters three new performance venues on the Hudson River. Designed as a haven for people and wildlife, it is a green oasis, held above the water by sculptural planters, and located just a short walk across a gangplank from Manhattan’s Lower West Side. Heatherwick Studio was initially invited to create a pavilion for a new pier off the southwest of Manhattan. Instead of designing a decorative object to sit in the Hudson River Park, the design team saw an opportunity to rethink what a pier could be.

Bridging Harlem’s active 125th Street corridor and the quieter 126th Street, The Smile is a mixed-used development that houses a nursing school on the street level and residential apartment units above. One-third of these residential units contain affordable housing units that strengthen and provide housing diversity within the neighborhood. East 126’s unique T-shaped footprint offers a diverse set of unit sizes and layout organizations, while also strengthening the connection relationship with the neighboring buildings.

Former New York City Mayor Bill de Blasio announced plans for a $10 billion coastal resilience project, designed to protect Lower Manhattan from flooding. In an editorial piece in New York Magazine, Mayor de Blasio outlined the ambitious plans to alter the waterfront of the Financial District, constructing a major infrastructural element up to 500 feet into the East River. Part of the Lower Manhattan Climate Resilience Study, and designed in collaboration with climate scientists and local offices, the multi-billion dollar project was designed to protect Manhattan through the year 2100.

The New York City High Line is a three-phased project that transformed the once disused elevated rail tracks on Manhattan’s West Side into one of the world’s most respected public parks. With the first section opening in 2009, architectural photographer Iwan Baan has been documenting the entire process. In turn, he showcased his work through a photographic journey highlighting the completed High Line.

When we think of public housing architecture in the United States, we often think of boxes: big, brick buildings without much aesthetic character. But the implications of standardized, florescent-lit high-rises can be far more than aesthetic for the people who live there. A new set of design standards from the New York City Public Design Commission (PDC)—in collaboration with The Fine Arts Federation of New York and the American Institute of Architects New York Chapter—hopes to turn over a new leaf in affordable housing architecture.

The Transportation Hub is conceived at street level as a freestanding structure situated on axis along the southern edge of the “Wedge of Light” plaza. As described in Daniel Libeskind’s master plan for the site, the Plaza is bounded by Fulton, Greenwich and Church Streets to the North, West and East respectively and Tower 3 to the south. It links the procession of green, urban spaces that extend along Park Row from City Hall Park to St. Paul’s churchyard, to the gardens of the WTC Memorial and Battery Park along the Hudson River.

In the wake of Hurricane Sandy, as communities band together to clean up the devastation and utility companies work tirelessly to restore the infrastructure that keeps New York City running, planners and policy makers are debating the next steps to making the city as resilient to natural disaster as we once thought it was. The question Irina Vinnitskaya explored is, which option or combination of options is most suitable for protecting New York City and its boroughs?

Sugar Hill is a new mixed-use development in Manhattan’s historic Sugar Hill district of Harlem that will feature affordable housing, early education programs and a new cultural institution. Initiated by non-profit developer of supportive housing, Broadway Housing Communities (BHC), and generated by a tight budget as well as the exacting parameters of the site, the concept challenges the traditional typology.

This article is part of the ArchDaily Topics: Cities and Living Trends. Every month we explore a topic in-depth through articles, interviews, news, and projects. Learn more about our ArchDaily topics. As always, at ArchDaily we welcome the contributions of our readers; if you want to submit an article or project, contact us.