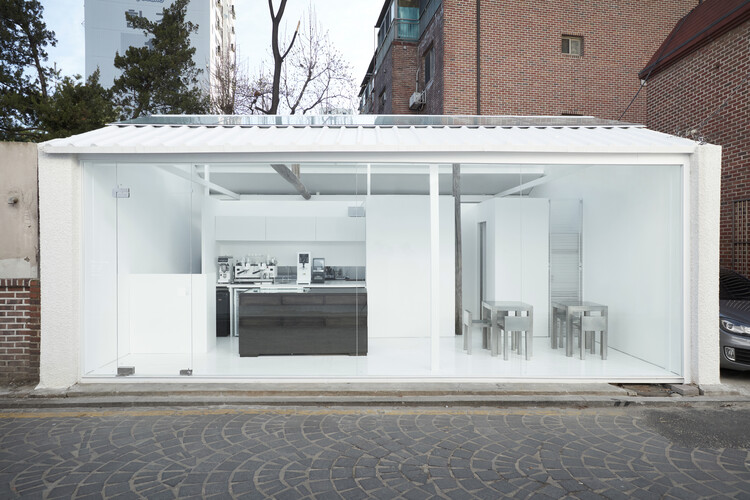 Text description provided by the architects. Hrr is a project that materialized with a client who held the desire to articulate the significance of the Han River. It is said that the onomatopoeic word ‘흐르르’ (phonetically translated to ‘Hrr’), which resembles the shape of waves, originated with the aspiration that wandering civilians would reach their desired space through the medium of the river.

To precisely carry out the objective of the client, much research was carried out during the concept development stage on the location of the site which is positioned at the entrance of the Jamwon Hangang Park, and images of the Han River.  Historically, the site once acted as a ferry dock, where it would have bustled with ferries.  This was conceptually much more attractive than the site’s current environment and was the birth of the project’s concept ‘A Dock Where You Can Come and Go.” The white main color complemented with mature wooden pillars is reminiscent of a ferry with sails. The bar table is also covered in wood stimulating images of a ferry.

With aspirations of becoming the most prominent space in the neighborhood, the intention was to maximize the strength and energy of the space through its immersion in natural light. As the sunlight penetrates the glass and converges with the interior, the space illuminates with an emerald aura, giving the perception of being brimming with water. As intended, the shimmering sunlight flowing in through the various cracks evokes the appearance of rays of sunlight shining through the water.

The floor-to-ceiling front window was inspired by the image of patrons enjoying a coffee or dining while having friendly interactions with pedestrians passing by and is emblematic of the space’s element to attract and gather people close by.  The space endeavors to act as a refuge and create a space that connects life to other strains of life. By blurring the boundaries between inside and outside, the space seamlessly permeates through its environment.  It is emblematic of a simpler time before the building of man-made embankments where the boundary between water and land was blurred.