Giardini Naxos, founded in 734 BC by colonists from Chalcis in Euboea, was the first Greek colony in Sicily. Ancient Naxos was destroyed in 403 BC, a center that rose to prominence in the Middle Ages as a fishermen’s village. Elegant villas were built in the late 19th century, used by the upper classes as vacation mansions.
The Greek heritage that remained in Sicily can be seen in the architecture of a few very important buildings. Located in Agrigento, the Temple of Concordia is the largest in Sicily and one of the most well-preserved Doric temples in the world. Today it is a popular seaside resort, accessible in less than an hour from Catania’s Fontana Rossa Airport, offering more than 40 hotels, and a large number of holiday homes.
A mixture of Greek, Latin, Aragonese, Arabic, Lombard, and Norman French, it can be said that Sicilian is a language rather than an Italian dialect. Throughout the year, the island hosts many artistic, cultural and religious events. Sicilians love to party.
Every town or village has a patron saint and they commemorate their names with parades, fireworks, eating and drinking. Many of the annual celebrations revolve around local food and the harvest such as sausages in cacamo or pistachios in Bronte.
Opera and classical music are well represented in Sicily. Palermo boasts the largest opera house in Italy, The Teatro Massimo. While Taormina’s magnificent Greek theater, with Mount Etna as a backdrop, features an impressive summer schedule.
Sicily is undoubtedly famous for its vibrant folk arts and crafts. Inspired by the rich history, brightly colored fruits and surroundings, Sicily has a number of unique crafts to explore for culturally oriented visitors. Carreto Siciliano is one of the most famous Sicilian folk icons. The carriage was a means of transportation that combined function, storytelling, and tales, and served as a kind of roving picture book depicting historical, literary, religious, and magnanimous events.
The ancient Phoenicians and Greeks brought their artisanal traditions to the island, creating flasks, kraters, chylexis, and other typical ancient wares, and the technique of placing bright and saturated colors was introduced in Sicily during the Muslim conquest.
Fashion house Dolce & Gabbana put Sicily on the fashion designer’s map and spread the island’s craftsmanship around the world by incorporating iconic Sicilian images into its bold prints such as horse carriage decorated with hues, ripe lemons and oranges.
This was an early inspiration for an interior design concept created for the hotel by THDP, a London-based interior designer and architectural practice with a team of 50% British and 50% Italian designers. Plus studio founders: Nicholas J. Hickson and Manuela Manino.

The hotel is located on the beachfront and from all the windows of the public areas the view is always towards the sea. The building exposes most of the room facing the sea allowing Mediterranean light in from the large windows and guests can enjoy the salty air from the guest room balcony.
The hotel was (and still is) one of the most important and famous hospitality buildings that have hosted a generation of tourists, attracting people from all over the world. It is located at the foot of the Etna volcano and near Taormina.
Detailed local research guided the narrative of the entire concept project, starting with the renovation of the main public areas, the lobby and bar, guest check-in, the restaurants Panarea & Sciara, and the creation of a new pool deck and Fluido Bar.

The interior design concept was inspired by the natural beauty of volcanic beaches, the sea, the presence of the super natural Mount Etna and the characteristics of Sicily and the ambition was to bring them to the center of the hotel. By adding local motifs, artwork and color, the goal was to add character, a deep sense of authenticity, and a polished resort-based color palette of natural colors with hints of sea hues.
The lobby was a large open space of over 700 square metres, pre-decorated in a heavy Baroque style, and the concept from the start was to revitalize this space, giving it a new heart and focal point – and to be attractive to both guests and locals to come.
From the start, THDP thought of adding a new lobby bar to the center of the space, as a visual anchor but also dividing the space and making it more intimate. With the new design, smart workers and leisure guests can meet using a polyvalent zone that can host everything thanks to the different types of seating. The style is elegant, Mediterranean with sea tones and Taormina stone tones blending into the interior and exterior color palette.
The reception was inspired by a welcoming Sicilian attitude and has been translated into three large reception desks with a dark gray lava roof manufactured by Nero Sicilia, the distinctive back wall covered in hand-painted local tiles by La Fauci, and the distinctive decorative lights are by Aromas del Camp and are from Copper and rattan, thus from the beginning of their journey, surround the guest with an authentic and local experience.
Featuring materials, features, and shapes that remind guests of antique craftsmanship, Panarea includes hand-painted tiles in niches at the entrance with traditional La Fauci motifs. The buffet area has screens featuring irregular but geometric shapes hanging from ceilings reminiscent of ancient Greek terracotta jars. Honoring the artisans continues on the walls covered in braided woven cowhide inspired by ancient Greek sandals.
The design of La Sciara Restaurant was inspired by existing lava stone wall coverings: the space features dark hues that reflect those of Mount Etna, and the dark, ominous stone is offset by vibrant blue and red glass – suggesting the colors of the sea at night, a bad omen, dark But it is attractive and welcoming. The restaurant’s metalwork is a rich copper tone, felt in a rich blue lacquer, and the table top features rich glaze-applied lava stone motifs, all by Nero Sicilia. The entire space naturally calls for dining in a more elegant and refined restaurant.

The new Quintessenza Bar is the perfect place to enjoy a drink with friends old and new In the heart of the lobby, right next to the covered guest elevators, the bar welcomes guests who want to socialize. Local wines and spirits as well as juices and coffee are all prepared to order in this unique Italian style.
The bar uses local materials to create a new feature in the center of the lobby space, where the top of the bar from local company Nero Sicilia is made of lava stone mined from the quarries of Mount Etna glazed with cracked white glass. The curved and fluted front strap is made of faux leather woven by Natutex, and the back strap features antique mirror with joinery finished in Italian oak and straw.
The Quintessenza’s two room divider-style banquette lounges, complete with USB and power outlets, are the perfect place to work and relax, and the banquette backs are finished with a woven Naturtex faux leather. The bar offers a range of seating options from the bar-facing bar stools by Gervasoni to the comfy armchairs by Miniforms and Torre 1961. The tables and banquettes are made to a THDP design by Riabita. The new highly decorative wall covering from Janelli & Volpi.
The check-in area has also been renovated, with new desks, addresses, backlit artwork, and tiles by La Fauci, all custom designed by THDP.
Reception desks are finished in dark gray lava stone by Nero Sicilia, with a woven faux leather facade by Naturtex adding warmth and texture, and office fronts feature oak panels that mimic the fluted effects of the classic columns of the Temple of Concordia.
Desks feature custom-designed headboards featuring arched panels with rattan inserts in them and backlit.

Panarea Restaurant is the place in the morning for breakfast but easily transforms during the day to host lunches, special events and dinners in the evening. The restaurant serves sweet and savory cuisine, in the evening the guest can expect to embark on an unforgettable gastronomic journey. The restaurant’s design focuses on new buffet tables that align with the show’s cooking area – allowing guests to admire the chefs who prepare their dishes on demand.
Buffet tables are concentrated in the new restaurant and can be closed during setting in the evening and special occasions with a specially designed screening. Buffet tables feature invisible heating and cooling elements that allow all dishes to be moved and alternated to provide maximum flexibility for the hotel. During events, buffet tables can be stripped down and closed – giving the restaurant less “breakfast” space and more space for fine dining.
New seating provides comfortable arrangements with a mix of table sizes, contained in fabrics that reflect the colors of the sea, visible from the restaurant. THDP has also designed high tables, which can be used in the morning for breakfast to display local pastries and in the evening a high dining experience. The adjustable tables are made by Riabita, who also carefully prepared and executed all the custom furniture for the project and project on site.
THDP’s custom-designed carpet is made by Ulster Carpets, and the ceiling light is a redesigned light fixture from a client-owned Milan hotel – Made in Murano.

The word “Sciara” is a local term, used in Sicily in the Etna region to refer to the accumulations of volcanic “waste” that form on the surface or on the sides of the mountain. Dubbed the hotel’s fine dining restaurant, the interior concept is intense and reflects the power and wonder of volcanoes spewing lava – thick, dark with touches of blue and red.
Watch more Ken Tadashi Oshim lecture
The walls are finished in ragged lava stone, giving a raw and natural feel, To complement this solidity, the seating is in contrast curved and streamlined and features 4 distinct tables decorated with enamelled lava stone by Nero Sicilia, the booths are also curved and help give the restaurant a focus. There are brass-toned displays that feature an oversized rattan design, adding a sense of privacy while not stealing the restaurant’s views of the sea and pool. The floors are stained natural oak in a herringbone design by Havwoods Design. Copper-colored lighting from Utu, hexagonal mirrors by Sofite.
La Sciara is an ideal location to enjoy life’s special moments with great Italian food, to savor authentic traditional Sicilian flavours, the chef relies only on the highest quality ingredients always sourced locally wherever possible. The restaurant has a long wine list of carefully selected local wines in its display wall. The restaurant serves lunch and dinner but can also be served during special occasions, in the evening guests can expect to embark on an unforgettable gastronomic journey. Having an open cooking show allows the guest to admire the chefs preparing their dishes. The menu includes a large variety of seafood including an interesting raw fish menu, all freshly caught from the sea in front of the hotel.
The bar, kitchen and wine display area are all elevated, with Nero Sicilia lava stone used both on the top and front of the bar, and in glass for the tables. Outside the restaurant there is a terrace and a pool bar, Fluido.
design team:
THDP, London + Italy Nick Hickson Chief Designer,
Manuela Mannino Project Team Eloisa Ronchi, Daniele Farshadfar, Simone Bretti, Marcello Acquati.
Architecture: Architecna Engineering Messina
Engineering company: Artelia group – ing. Angela Tortorella
Project Management: Colliers Property Management Services
Procurement Assistance: THDP
Managing Director: Patrizia Candela
RG Naxos Hotel’s photo 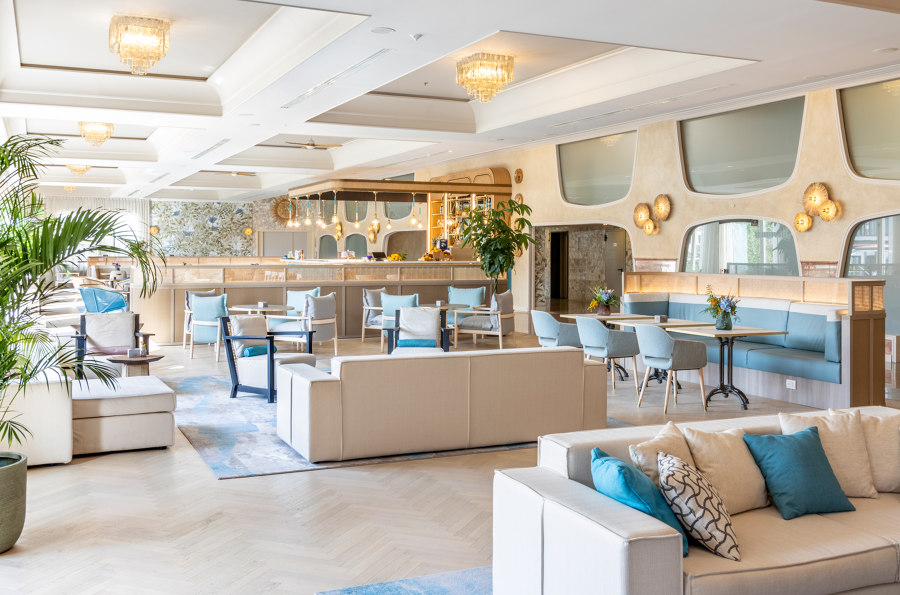 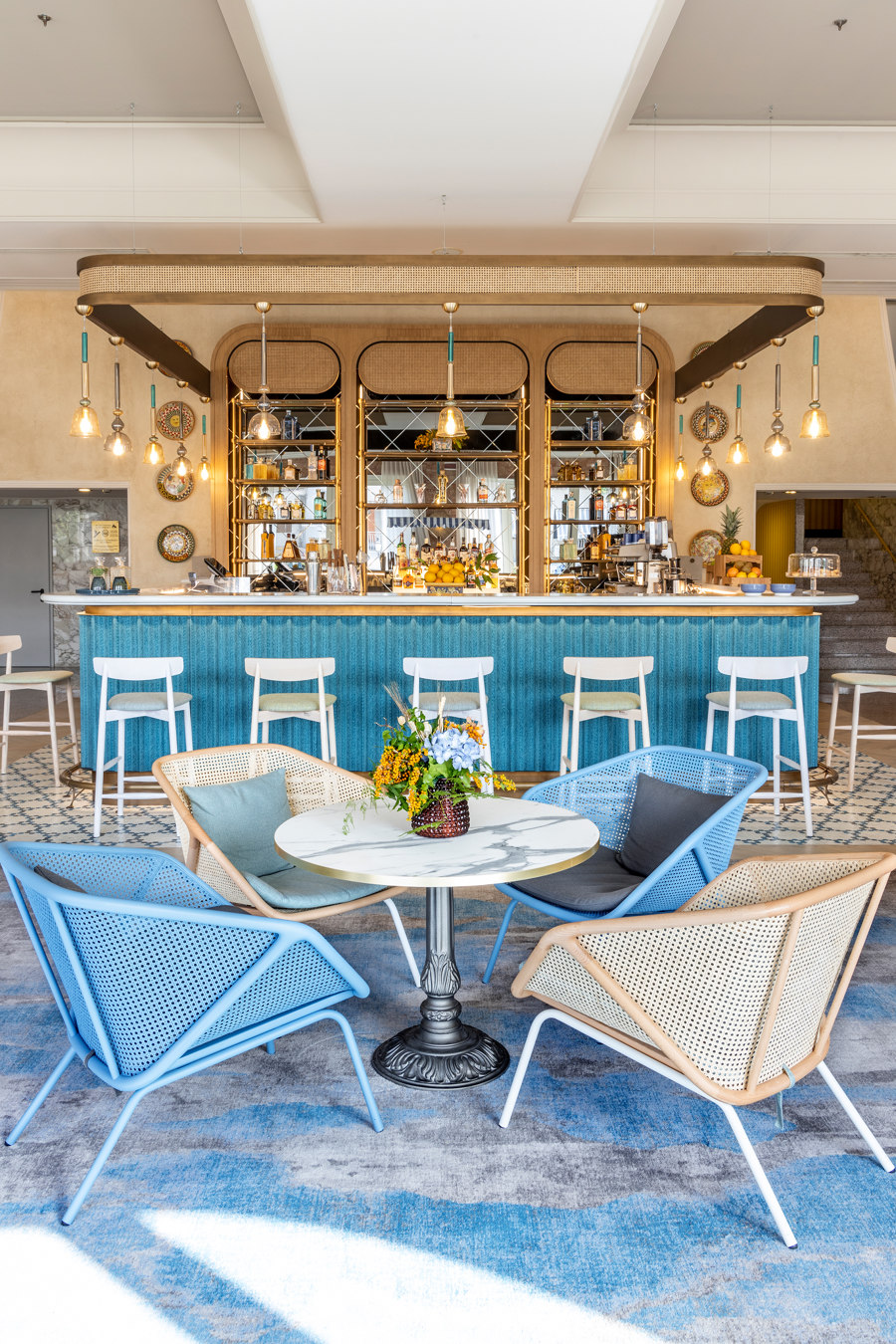 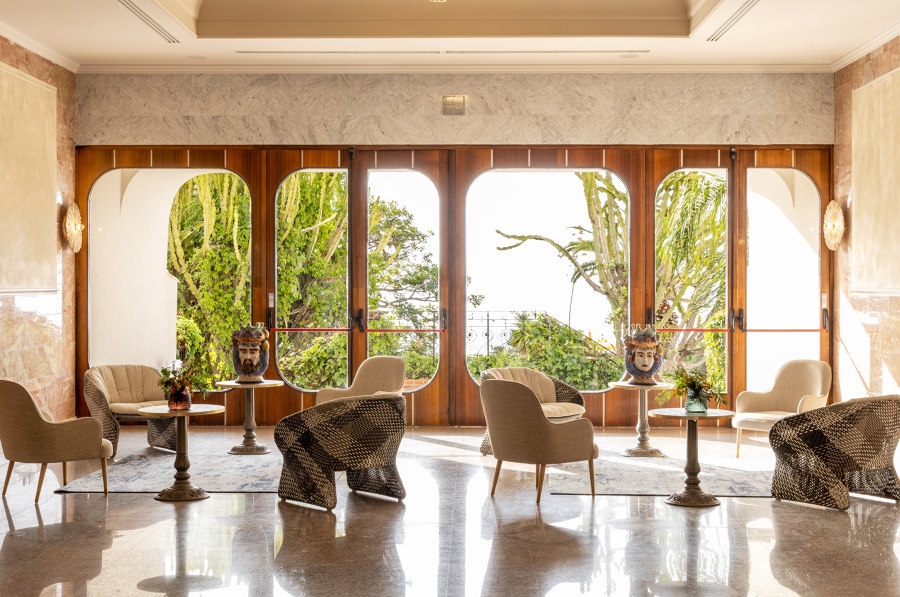 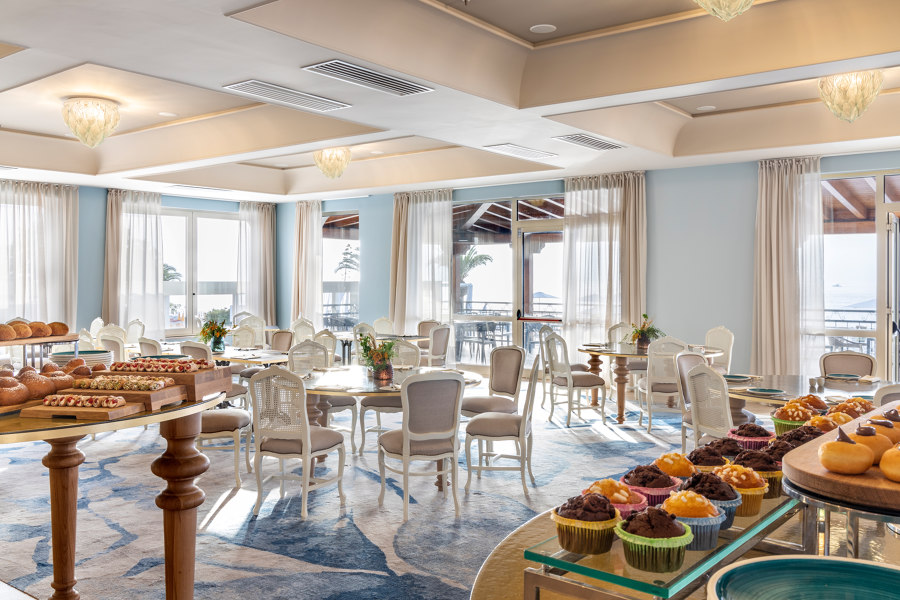 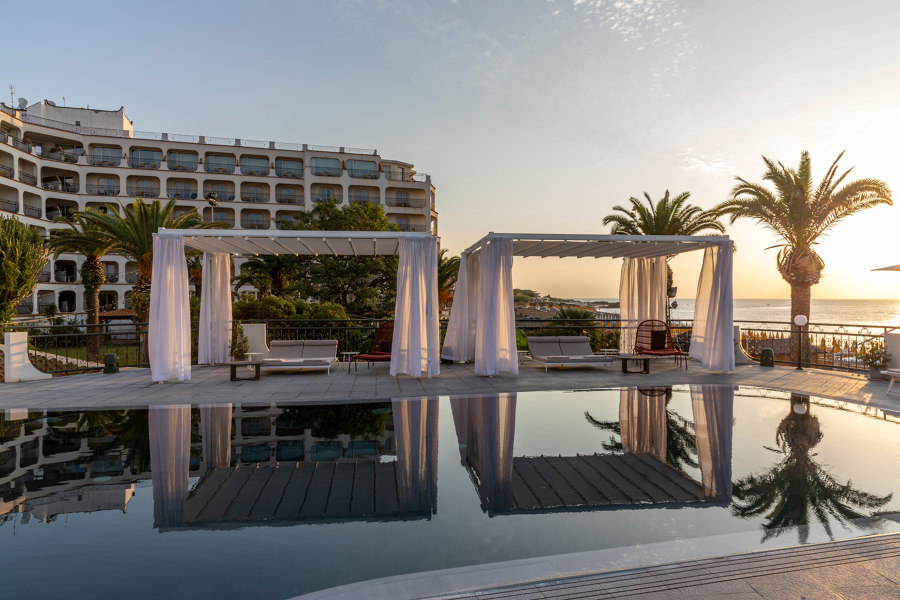 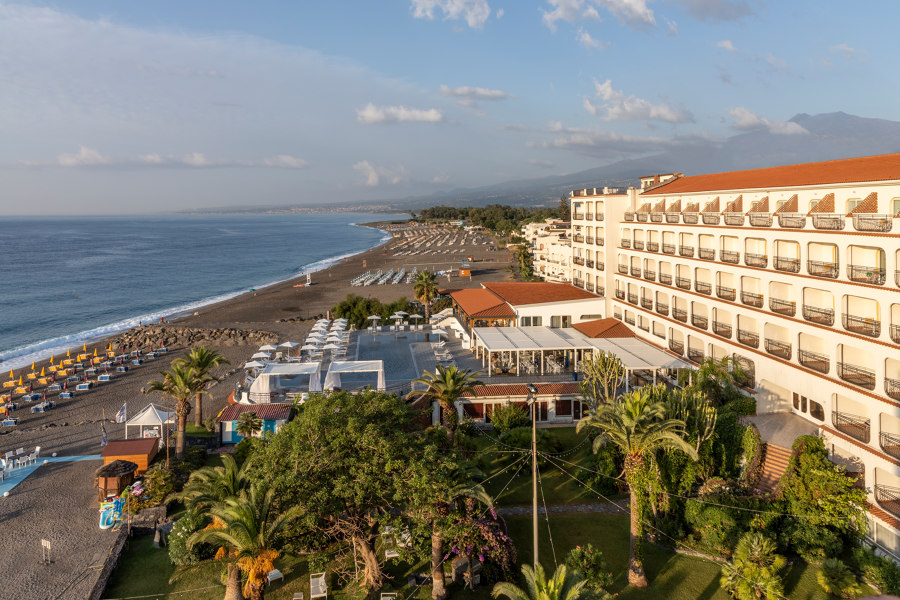 See more Mall projects What is the architectural impact on it due to epidemics? What is the role of the engineer in its development?