Bringing architecture agriculture and aesthetics together on a vertical farm at Bright Food,

in which he combined the concept of ‘vertical forest’ and ‘agro-industrial farm’.

discovering a new way of urban production in urban areas.

The new urban agricultural complex provides commercial and office space in the vibrant city of Shanghai.

How did the idea of ​​the vertical forest get started?

The crises that people experienced during the past years as a result of the spread of urbanization,

which included reducing the productive land area and destroying the living spaces of animals and plants,

led to the invention of the project idea to try to eliminate the crisis.

The architecture firm discovered a new way of urban production and life based on these problems,

and proposed a solution to meet the urban food demand of the world.

the phenomenon of vertical forests has intensified in cities around the world.

The vertical growth of buildings is a contentious issue for architects and urban planners,

and many initiatives in the vertical dimension have similarly sought to promote the use of vegetation in urban areas.

Vertical gardens, farms, forests, rooftop botanical gardens, and elevated structures for urban farming are some of the many possibilities of verticality in growing plants.

Each has unique characteristics and specific impacts on the city and its residents. 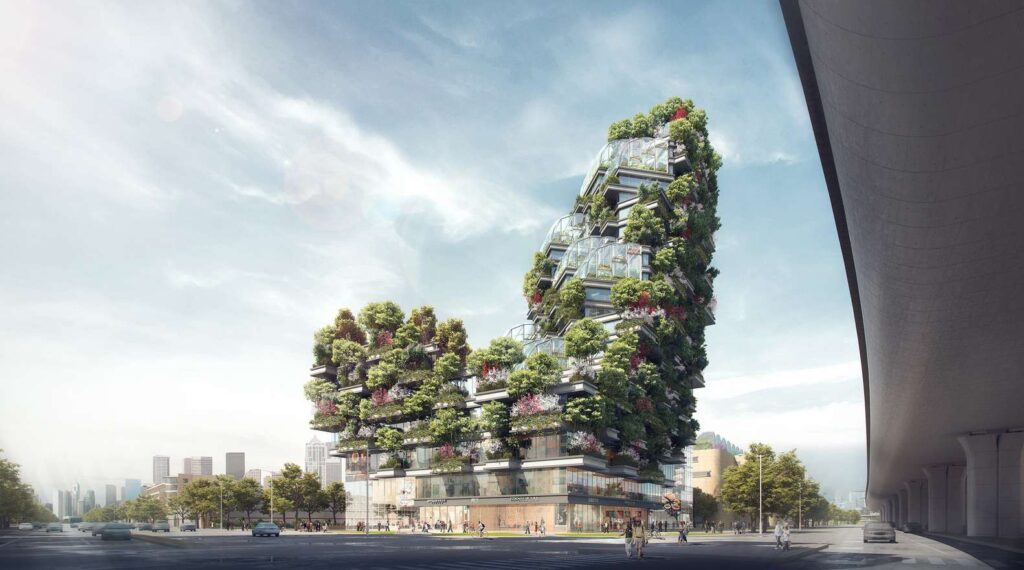 But is verticality the best solution to making cities greener?

What are the effects of this measure in urban areas?

And what are the benefits of urban plants that are lost when adopting vertical solutions rather than promoting their cultivation directly on the ground?

The structure should be an anti-scaling measure, aimed at controlling urban expansion.

The plants on the balconies will primarily include fruits and vegetables,

planted in a custom-designed 45-degree south dip that intersects with the structural grid of columns and the exterior line of the building.

Climate conditions in Shanghai and the seasonal diversity of crops were instrumental in forcing the architects to design 12 terraced greenhouses to ensure the healthy growth of plants.

The greenhouses will be made of ETFE film, a lightweight, durable, transparent and fully recyclable material.

He also planted shrubs and small trees on the northern facade of the building,

for more security and privacy, representing the traditional vertical forest.

Vertical forests have multiplied in limited areas of land in the cities of Tokyo and New York,

and vertical farms and green roofs have been established, to take advantage of space,

Currently, more than 36 tons of organic vegetables are grown on top of buildings each year,

and this system not only produces food, but also helps prevent many pollutants from entering the city’s rivers.

In Tokyo, the Surado Farm project has built orchards open to the public on the rooftops of train stations,

and around the vertical farm-facing office building.

Discussing this very special edition during Milan Design Week 2021, Salone del Mobile curator Stefano Boeri mentioned that engineers have worked to democratize design as well as environmental quality in his projects around the world.

For more articles on: INJ Architects