Getting There: Our Lady of Namyang Cathedral

It can be said that the design of the building is a work of creating a form that fits well with the surrounding environment and injecting various activities and emotional experiences to suit it. Architecture focuses on exploring the impression of the space to be built and the potential within it. As Le Corbusier said, design always reminds us that there is space in our lives, draws us into a dimension of enlightenment that is difficult to comprehend, and creates indescribable beauty by removing indefinite existence. Under these circumstances, the architect must interpret his role to create a space for silence, contemplation and prayer, and the building created through the process forms the light and shape of a three-dimensional model that forms an emotional connection with visual perception. People want to be able to stay in holy places to meditate and pray, and for a long time, many places have lived up to this expectation. It is clear that building a church in a modern, highly secular society is a daunting task and a very difficult challenge since the avant-garde movement of the twentieth century declared the “death of art,” or, in other words, the elimination of linguistic symbols and patterns. Designing a sacred space after experiencing the emotions of Paul Klee’s subtle brushstrokes or provoking Pablo Picasso’s uncanny gestures may seem naive. Perhaps it is a difficult task for creatures like us, who feel anxious and suffer from poverty of expression, to contend with. However, if we continue to believe in the core values, building the church will be an urgent and profound task that cannot be avoided any longer.

You can watch home remodeling at the lowest cost

Over the past few decades, Father Lee Sang-gak has transformed Namyang Shrine into a “sanctuary in the heart of the city” by creating walkways, places of rest, and pilgrimage processions for meditation and prayer one by one. The cathedral is located at the most important site in the Holy Land of Our Lady of Namyang, with dense forests and vast hills spread around, and lies between valleys on the north-south axis that leads from a low mountain to the city. Our Lady of the Holy Land Cathedral in Namyang is an attempt to create a new focal point that includes religious and local communities. Father Lee Sang-gak, who put a lot of effort into creating the Holy Land, calls this project the “Peace Garden”, which has great moral, civic and religious implications. This priest tries to resolutely maintain his infinite beliefs, but his beliefs are constantly in conflict with the social phenomenon of rapidly producing and consuming everything. Through this practice, he tries to convey the wonderful, the beautiful, and the just to other pilgrims who live in the oppression created by society and institutions. This attempt is accompanied by a determination to act concretely rather than abstractly or ideally through a physical alteration of a region that is also a place of remembrance for the massacre of Catholics perpetrated during the Joseon Dynasty in the mid-19th century.
Learn about the redesign of the Muharraq Souq in Bahrain by Anne Holtrop
When I first visited the site, I thought the highest point in the Holy Land of Our Lady of Namyang was the most suitable place to build a new church. This is because standing there allows you to get a glimpse of the general appearance of the Holy Land, and when the two towers are erected, the void between the Holy Land and the city can certainly be greatly emphasized. A cathedral full of holiness should fill the void with attitudes towards life, valuable messages and aspirations of the people without being overly aware of the surroundings. At the same time, we have to make it a reminder of the historical events that have accumulated on the ground on which we stand. In the process of calculating the area required for the cathedral, the natural terrain was considered important, so most of the spaces of large size were planned underground. The large sanctuary contains meeting space that can accommodate about 1,500 believers, and on the sides are eight small shrines and a high priest’s seat. Above the priest are two semi-circular towers that were added during the construction phase. In the first basement, there is a 350-seat sanctuary where masses can be held on weekdays, and additional facilities such as the sanctuary, shops, and toilets are planned alongside it. A pilgrimage route leads to the main entrance to the cathedral, which is located at the highest point in the Holy Land of Our Lady of Namyang. People can enter the building through this, and through two side staircases, you can go up to the Great Sanctuary on the top floor. Two semicircular towers starting from the lower floor rise to about 40 meters above the level of the priestess. The top of the tower plays a secondary role in bringing in abundant light through the roof, and the apse creates two towers that are very attractive representations. The cathedral’s applications give it an image that interacts with its surroundings, building a strong and symbolic identity. Only a few years ago, the Mausoleum of Our Lady of Namyang was recognized only as a green area on the outskirts of the city. However, over the years, thousands of church members have actively participated in the creation of religious spaces and gardens and, thanks to their dedication, is an important site in the area.
Getting There: Our Lady of Namyang Cathedral 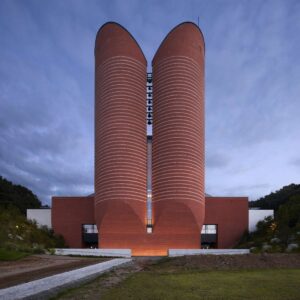