Achieving sustainable architecture in the dormitory building at St Andrews University of Technology and Management,

The project is a dormitory for female students, affiliated with St Andrews University of Technology and Management, which is located in Gurugram, Delhi.

Zero Energy Design Lab designed this dormitory for female students after the completion of the dormitory in 2017.

The design focus of this project

The design focus is on planning a safe center for girls, which is considered a campus on-campus according to the spatial plan of the campus,

the university residence has been designed to accommodate around 130 students spread over four floors,

including social spaces, storage and auxiliary spaces such as recreation rooms.

It was necessary to emphasize the role of the building as an axis in which the interior and exterior spaces are integrated,

while defining the direction of the project.

The designers of the project have physically and visually integrated the interior and exterior spaces at different heights,

by arranging the spaces, to encourage interaction and social activities among the students.

This gave the students the freedom to decorate their own space without any restrictions in a safe environment.

A variety of social hubs are created within the building, using the concept of an adaptive layer with layers or transitional zones,

which coordinate changes in the environment between the exterior and interior of the building.

An indoor lounge in the center of the building created an intimate environment for students to study or talk.

This balcony is designed as a gathering space for students in the morning and late evening except during the day in summer, and all day in winter. 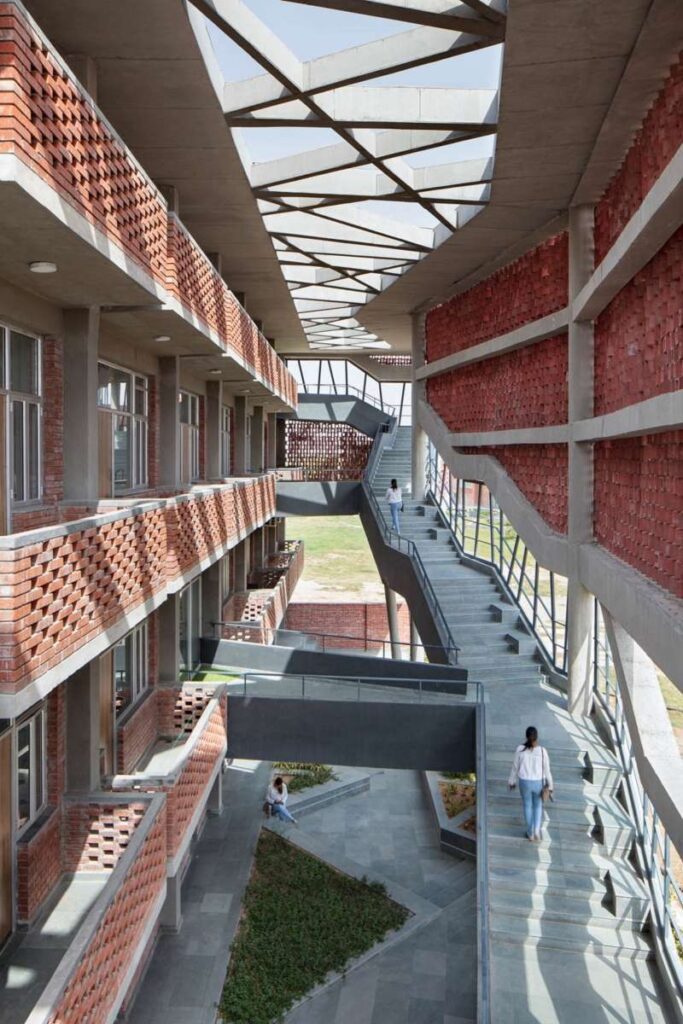 The southern staircase is an impressive space in terms of both volume and visuals.

In the center of the building, it is a transitional zone for the adaptive layer,

which connects all floors of the building while aesthetically integrating the southern facade.

The designers kept the design simple, while presenting the building’s essential elements,

such as staircases, as hubs for social interaction.

The stair space is an important social center that serves as the base for all activities,

from large-scale events to informal meetings.

An open space was created by arranging lounges and rest areas to facilitate exchange and collective learning in transitional and movement spaces such as bridges.

and the bridge seamlessly extends to the student lounges on several floors, creating a streamlined space.
The space outside the lobby, connected to the stairs, is used as a badminton court in the evening,

and there is an area to play chess and billiards in the courtyard. 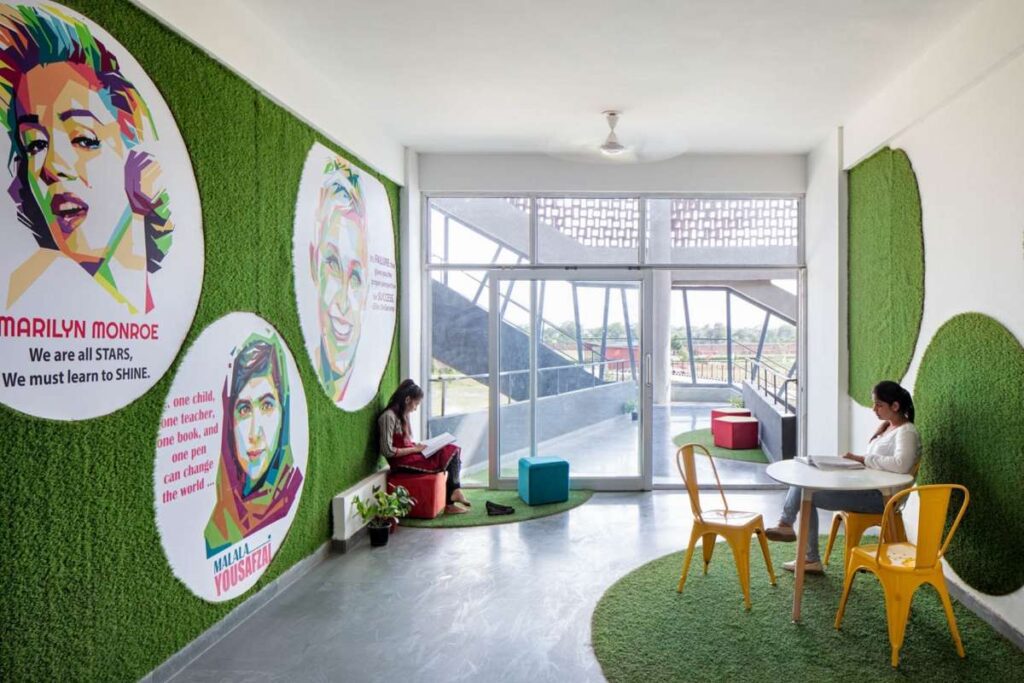 Design consideration of heating and cooling issues, lighting and ventilation

The facade of a building is one of the key factors for energy efficient design,

but the most important issues in zero energy design are adaptive hierarchical spatial structure and transitional space.

The concept of adaptive comfort has been introduced to reinterpret current standards of human comfort.

In this building, this principle is based on the idea that people experience,

and adapt to different indoor conditions differently depending on clothing, activity and general physical condition.

From this point of view, the female students’ dormitory was developed into a multi-dimensional space connected hierarchically through the adaptive layer method.

Then each space was set up with the concept of a warm environment that values both function and comfort.

So that the students feel a noticeable change in the thermal environment as they move from the inside of the building to the open space.

and continues into spaces such as terraces, staircases, bridges, corridors and small halls.

Each space is used as a warm gathering space for the students where different activities such as learning and conversation are possible.

In addition, strategic landscapes are exploited in parallel, so that green spaces are drawn inside the building to create a cool microclimate through cooling

and shade effects through evaporation, and energy is saved by reducing the use of mechanical ventilation.

The flower bed edge is designed so that people can sit inside so you can experience the nature indoors.

The bamboo planted around the building was used as a barrier to prevent the interior space from being exposed to direct sunlight,

and a tree was planted that provided ample shade

in the outdoors where the ground was completely exposed to the sun’s rays, providing a space for sitting and resting. 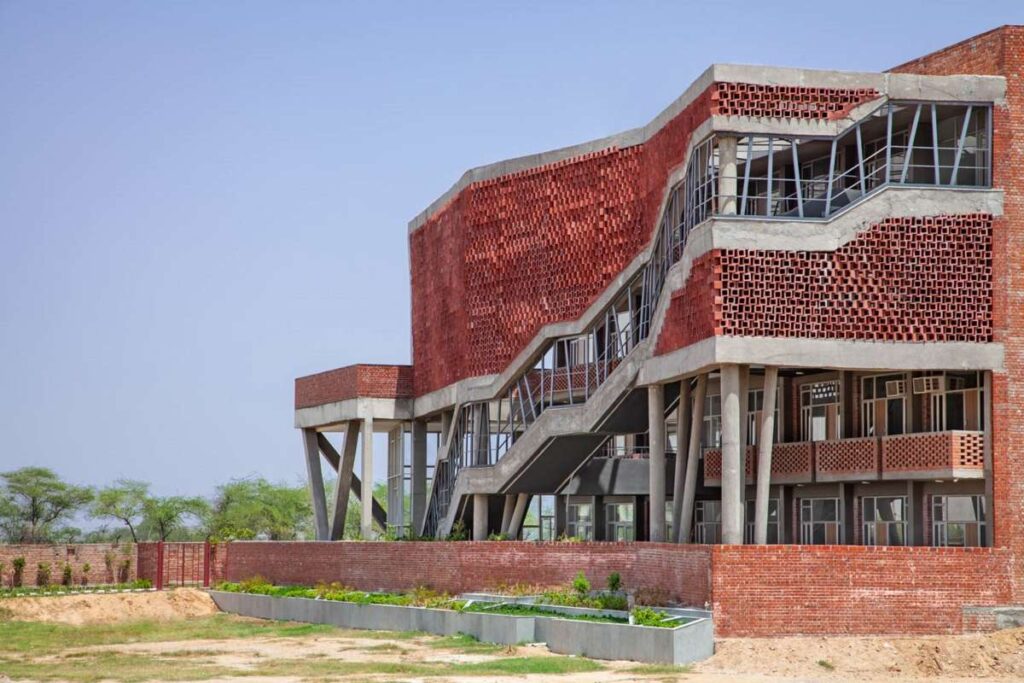 The effect of dual interface on energy efficiency

The dormitory building has a double facade designed by stacking bricks and concrete blocks,

to form a semi-permeable layer that casts shade and directs airflow to help regulate temperature between indoors and outdoors.

This facade, which acts as a thermal storage element, reduces direct sunlight and diffuse solar radiation on the main elevation by 70%,

and reduces heat gain in the dormitory living space located behind the facade.

As a result, the building’s mechanical cooling load has been reduced by 35%.

This figure far exceeds the case of the Energy Conservation Building Act for public buildings imposed by the Indian government.

The exterior wall screen was made using colored concrete blocks resembling the color of red bricks.

Not only do they act as a suitable thermal mass to absorb heat, but they are also deep enough to a depth of 20 cm

so that direct sunlight can pass through several layers within the block.

Sunlight is reflected off the surface of the block several times before reaching the room, reducing glare.

In addition, the outside air is compressed and According to Bernoulli’s principle

because it passes through the wide pores of the concrete block and loses heat.

The concrete blocks were built by rotating them slightly at specific angles based on an analysis of the insulation to gain solar heat.

and patios away from the interior, this space through which the outside air can be accessed while maintaining a comfortable thermal environment through the adaptive layer.

A seating area like a terrace created between indoors and outdoors also allows the students to experience nature while staying inside the building and paying attention to their surroundings and activities. 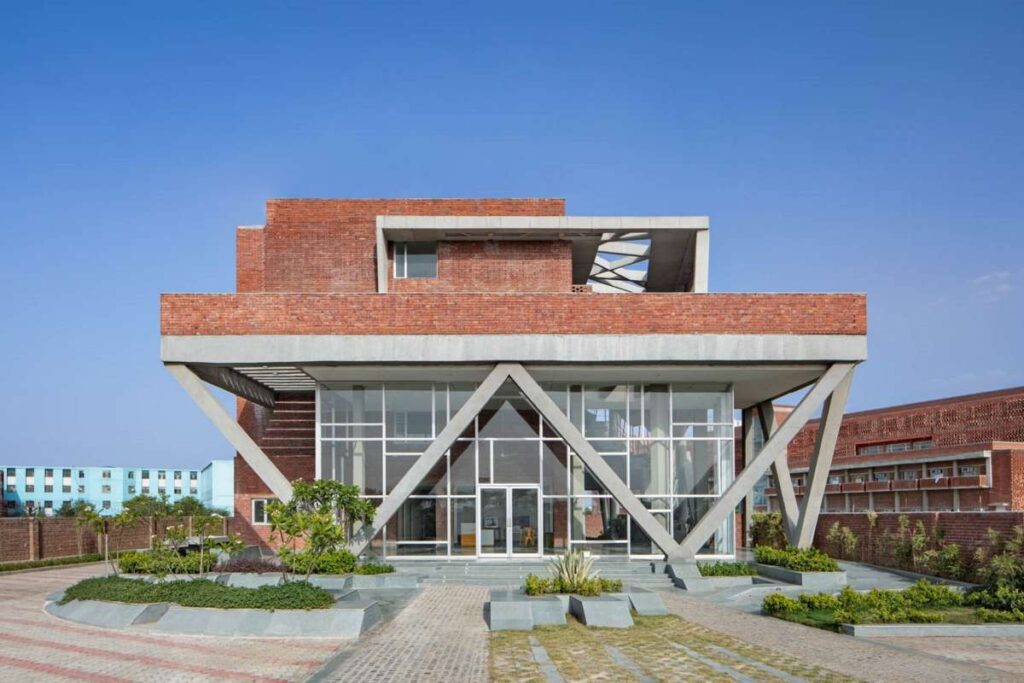 The column is designed in the form of a cylinder with consideration for the physical aspect and appearance,

in addition to the arrangement of the columns necessary for the building taking into account that the independent columns do not stand on top of each other,

but are configured like a tripod for greater stability against vertical loads.

The rooftop pergola was designed using cement boards and steel beams to achieve a lightweight construction and optimum build quality.

the independent facade was constructed to be approximately 9 meters away from the building over 3 storeys high.

You may like: Application of sustainability in architectural design and its implications for health and the environment