Many works of science fiction forget one fact when they imagine the future of cities: nature. But for the past fifteen years, urban planners, architects and urban environment experts have been drawing the outlines of a completely different type of city. Vegetable, sustainable and even self-sufficient metropolises. Some architects, notably in Saudi Arabia and Singapore, are sketching out futuristic and somewhat utopian concepts.

To understand where such ideas come from, which at first glance might be considered fanciful but which nevertheless seem to be on the way to being applied on a large scale, we must first explain the vital issues that our cities will soon face. Rising temperatures and natural disasters that will become more frequent due to climate change. Problematic air and water pollution caused by CO2 emissions (80% of which are produced by cities). And a demographic explosion that risks making everything worse.

According to the UN, the world’s population is expected to reach 9.7 billion in 2050. Of these, 75% will live in cities. It is true that rapid urbanization will be concentrated in developing countries such as India, China and Nigeria. But Western cities will not escape overpopulation either.

As Mathieu Favriau, urban planner and environmentalist at Urban Hymns, explains, the public authorities are aiming to combat the artificialization of land and urban sprawl. “The solution: exploit all the land resources of cities. So tend towards a significant urban densification,” he says.

Densification should first push them to find solutions to contain and then reduce their environmental footprint. To this end, many cities, from Amsterdam to Montreal, including Oslo, Dubai, Seoul and Madrid, are already trying to reduce the number of cars, or even get them off the streets altogether. Streets are being pedestrianized, and bicycle lanes are multiplying.

Newly built cities, such as Chengdu in China and Masdar in the United Arab Emirates, have even been designed from the outset to be entirely car-free. Their master plans call for all streets to be walkable or bikeable. According to Chris Drew of the architectural firm SmithGill, cars will eventually be unnecessary in the “new cities” of the future:

“Children will be able to walk to school and people will be close to their place of work.” 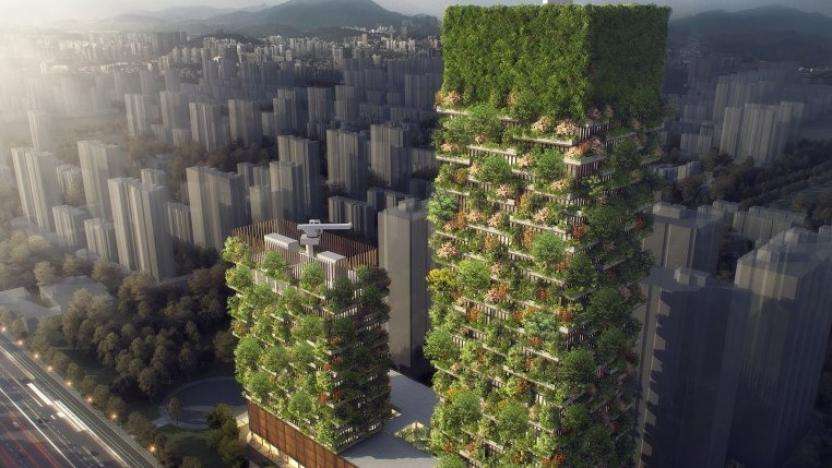 Planting trees in the city remains complex, due to strong land pressure and lack of space. This is why architects and urban planners are also designing “vertical” forests. In Milan, the two residential towers of the “Bosco Verticale” project have since 2017 grouped together more than 20,000 plants and trees, the equivalent of 2 hectares of forest spread across the façade. This vertical reforestation project aims to “increase biodiversity, reduce urban sprawl and help regulate the microclimate.”

In Singapore, where space is very limited, tree plantings on rooftops and terraces have been increasing for the past 5 years. This “green architecture” has given rise to the city’s nickname: the “garden city”. The Parkroyal and Oasia hotels, in particular, have a planted surface area 5 to 10 times greater than their floor area. “This means that in the city of tomorrow, nature could be 10 times more present than if the city did not exist,” says architect Wong Mun Summ.

There remains the risk of seeing a new form of inequality emerge, linked to the more pleasant living environment provided by vegetated towers. In Milan, the wooded skyscrapers of Bosco Vertical are mostly populated by wealthy people. The complex has 131 apartments, with prices ranging from 10,000 to 18,000 euros per square meter. In South Korea, Songdo also attracts only wealthy families. Because this “green smart city” follows a real estate logic, which is based on public-private partnerships, and therefore the need to attract populations with a high social status to be profitable. It is undoubtedly to avoid this that Singapore’s urban planners are increasingly favoring green building projects intended for all social categories, with a large share of low-income housing.