Project specification
Project name: Transparent dome designed by Smiljan Radek
Project Architect: Smiljan Radek
Show title: London sky
Event: Alexander McQueen Womenswear Spring/Summer 2022
Company: Alexander McQueen
Structural Specialist: ES Global
Advertising Design Agency: Gainsbury & Whiting
The Transparent Dome by Smiljan Radek is an enlarged structure proposed for the Alexander McQueen Show in London. This transparent dome was designed for the Summer 2022 fashion show for the company’s first-ever show in London after a 20-year hiatus.
Londoners looking out over the Wapping skyline can see a giant bubble on the highest level of a structure that provides curiosity and creativity to skywatchers. The onion dome appears to be floating like a biosphere or greenhouse. 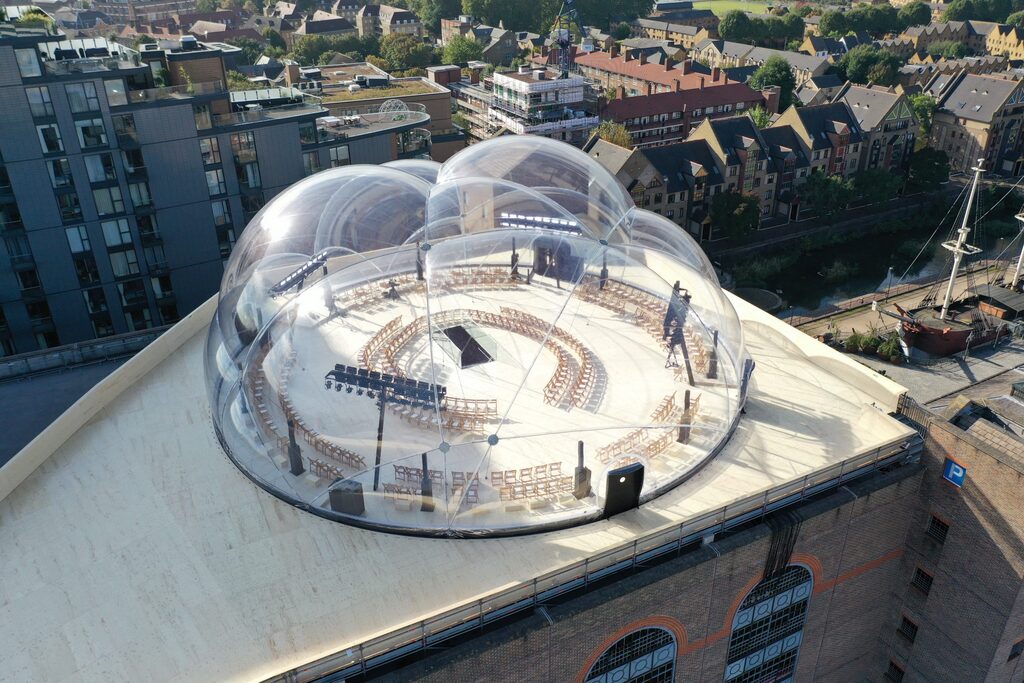 Source: Desien.com
Located in the Wapping District, on top of a multi-story car park next to the famous Tobacco Dock, the building is a former tobacco store now used for commercial events and major corporations.
The current version of McQueen aims to celebrate the current working and living environment and everyday experiences. The transparent dome of the Alexander McQueen show featured a collection of women’s clothing in East London inside a transparent cloud-shaped building imagined by a Chilean architect.
On October 13, the Spring/Summer 2022 fashion show was held on this translucent dome by Smiljan Radek on the roof of a parking lot in the Tobacco Pool. The occasion marked a return for the British fashion label, which has presented its latest designs in Paris for the past 20 years.
The exhibition, called London Skies, was inspired by the overcast sky that Sarah Burton, Alexander McQueen’s creative director, and the McQueen crew observed from their office. The latest collection of women’s clothing is also inspired by the ever-changing and often stormy London skies, which blend well with the settings. 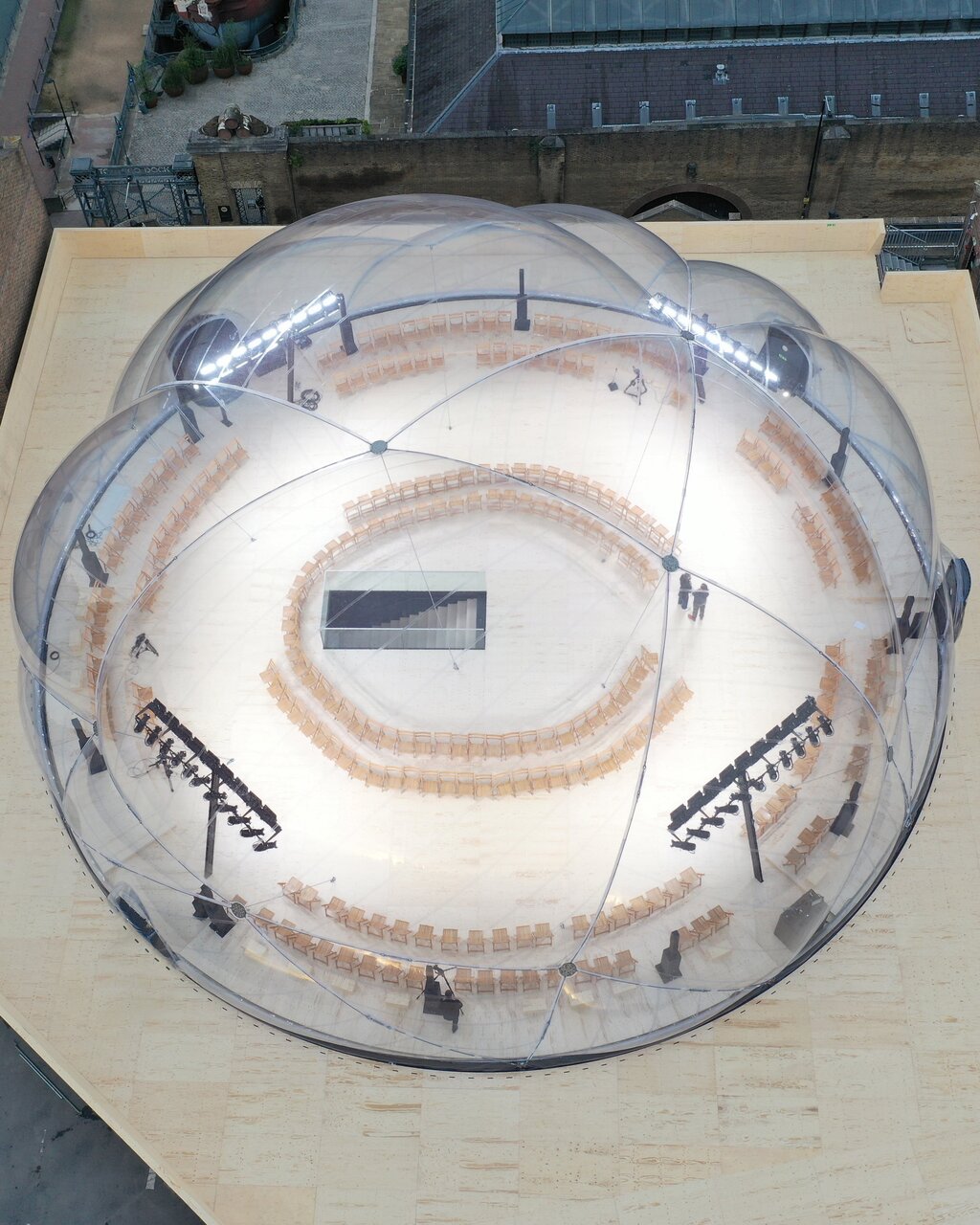 Source: Desien.com
“We moved from water – and mud on the banks of the Thames – to the sky and the ever-changing sweeping splendor. The artwork of the prints is shot in this set of studio roofs where we are fortunate enough to get the most stunning views of the city: from St Paul’s Cathedral to the London Eye” said Sarah Burton, a chief creative officer of Alexander McQueen.
The dome was surrounded by scattered clouds, creating the impression that it was enveloped in a ball of air, with picturesque city vistas widening into a vast sky.
The stylistic flair was intensified for a presentation featuring an off-the-shoulder skeleton corset dress in a sunny yellow pongee and dress with a low neckline, ruffled channel, and stripe detail in poly taffeta printed with an elaborate stormy sky. The climate, which alternates between a bright, sunny, and frightening shade of gray. 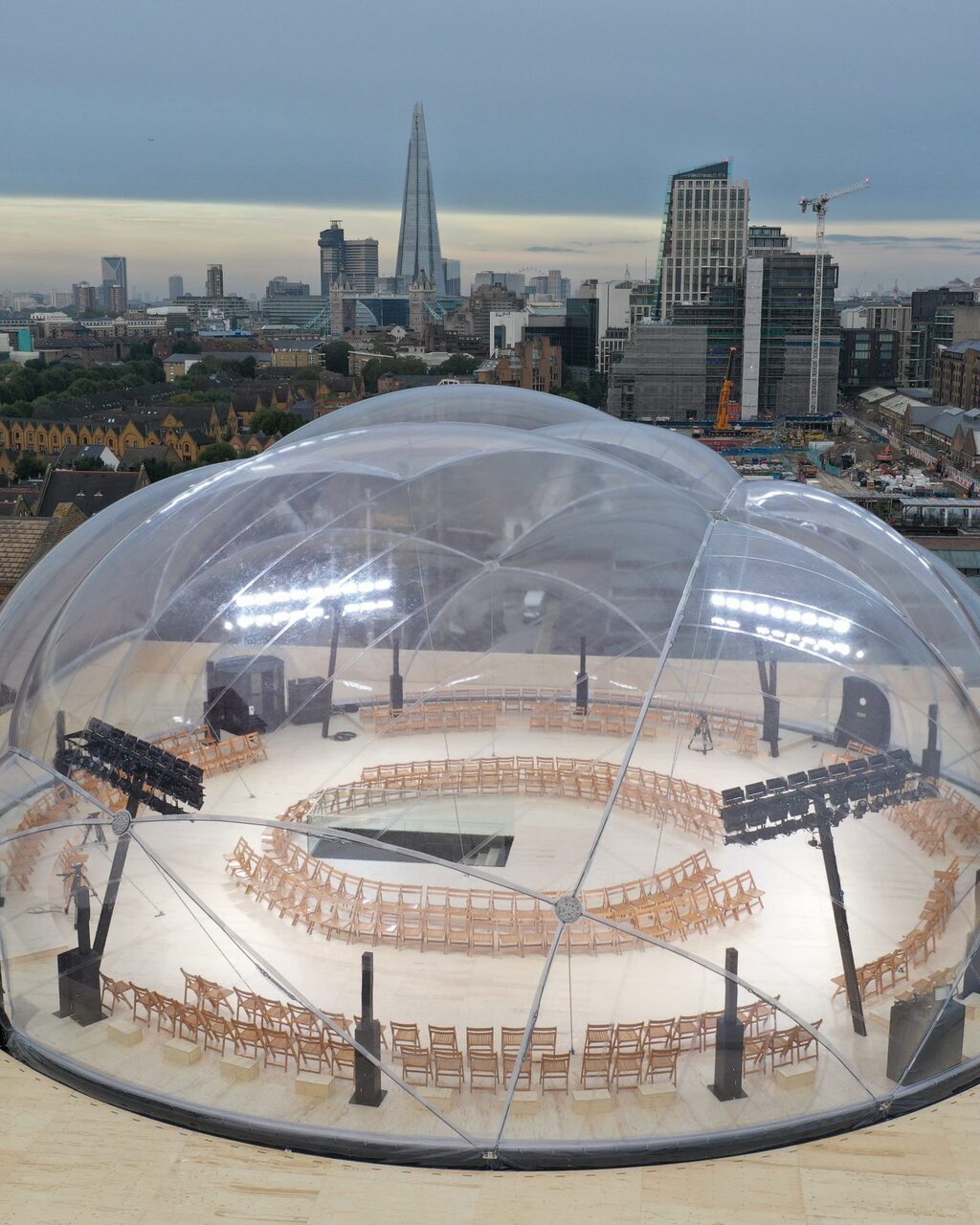 The transparent dome of the Alexander McQueen Show is the result of the architect’s close collaboration with global construction expert ES and creative firm Gainsbury & Whiting to manage the development and manufacture of the exhibition space.
ES Global has created a translucent spherical superstructure that has been amplified and bound by steel cables to make it appear as if it sprouts from its cable network. 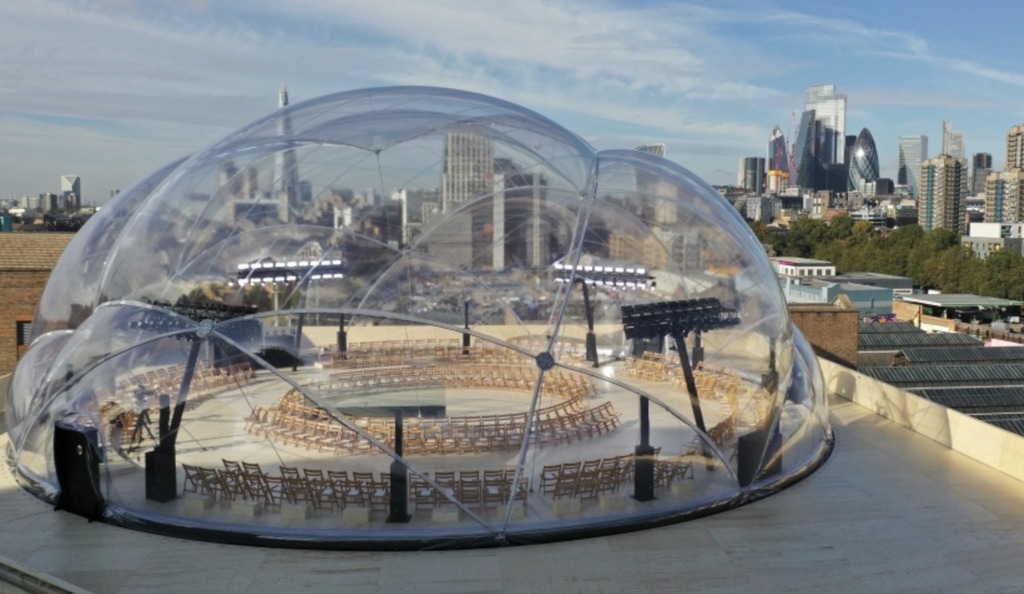 The area was created on top of a massive platform supported by a unique scaffolding system, which was intentionally left exposed at its edges to reveal the skeleton of its structure due to the sloping nature of the car park’s surfaces.
A semi-transparent membrane was used to compose the physical environment, which was attached to a round, curved tube at its base. A mesh of tensile steel wires is suspended between the channels of the enlarged membrane, supporting and constraining the membrane.
The interior entrance to the exhibition space bubble was deliberately positioned at the rear of the rooftop site, allowing attendees to roam around the area while enjoying fantastic views of London. 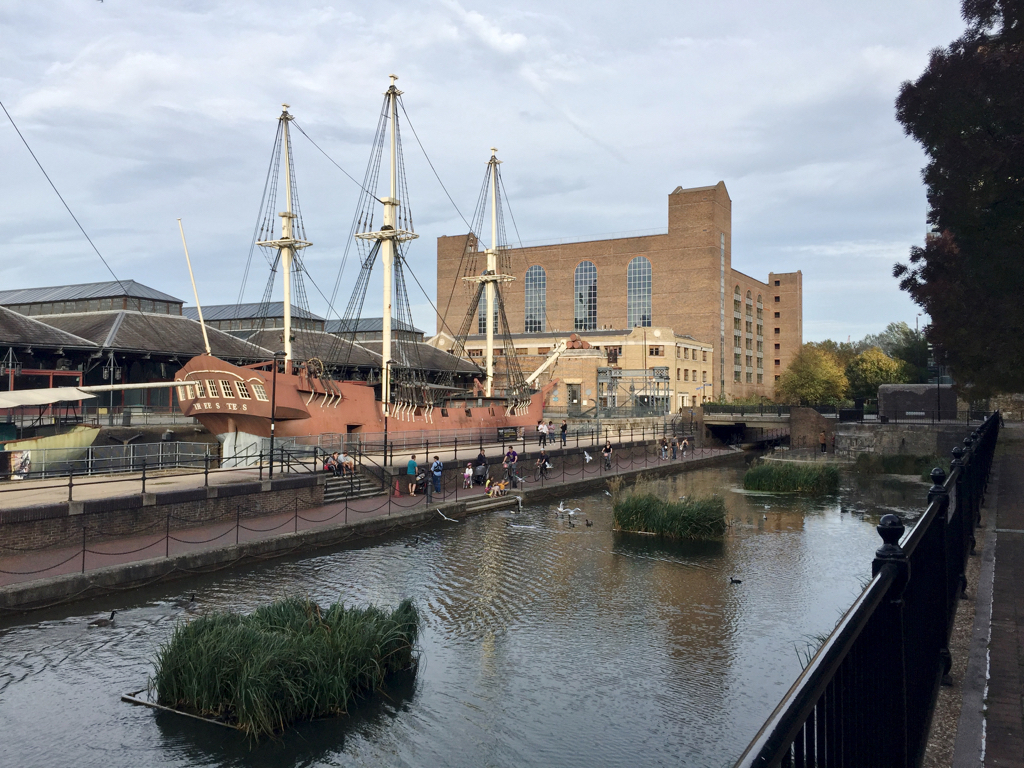 A pair of curved rows of folding wooden chairs serve as seats for a fashion show inside an overgrown cloud-like bubble. Up a series of steps from under the plywood platform in the center of the room, amid a loose circle of seating, the models approached the booth after the show began.
Several ducts in the floor pushed air into the bubble to keep it inflated, while closed revolving doors kept the air out.
The area and its operations were powered by an electric generator which was placed in the basement of the car park. Hydro-treated vegetable oil (HVO) was used to power this, a renewable alternative to diesel created from vegetable oil, grease, green waste, and farm food scraps.
The colossal dome aspires to make the main characters of the fashion show the aura of the past and the environment of the city. That way, tracks like Massive Attack Out Of Harm and Daniel Avery’s Saturday Fade compliment them nicely.
The concept presented in McQueen’s show is for a woman to be a storm chaser. It speaks of the storm-chasing traits that bind the unique group of people who wear these clothes. They live in the same universe, and the clothes were designed with them in mind. 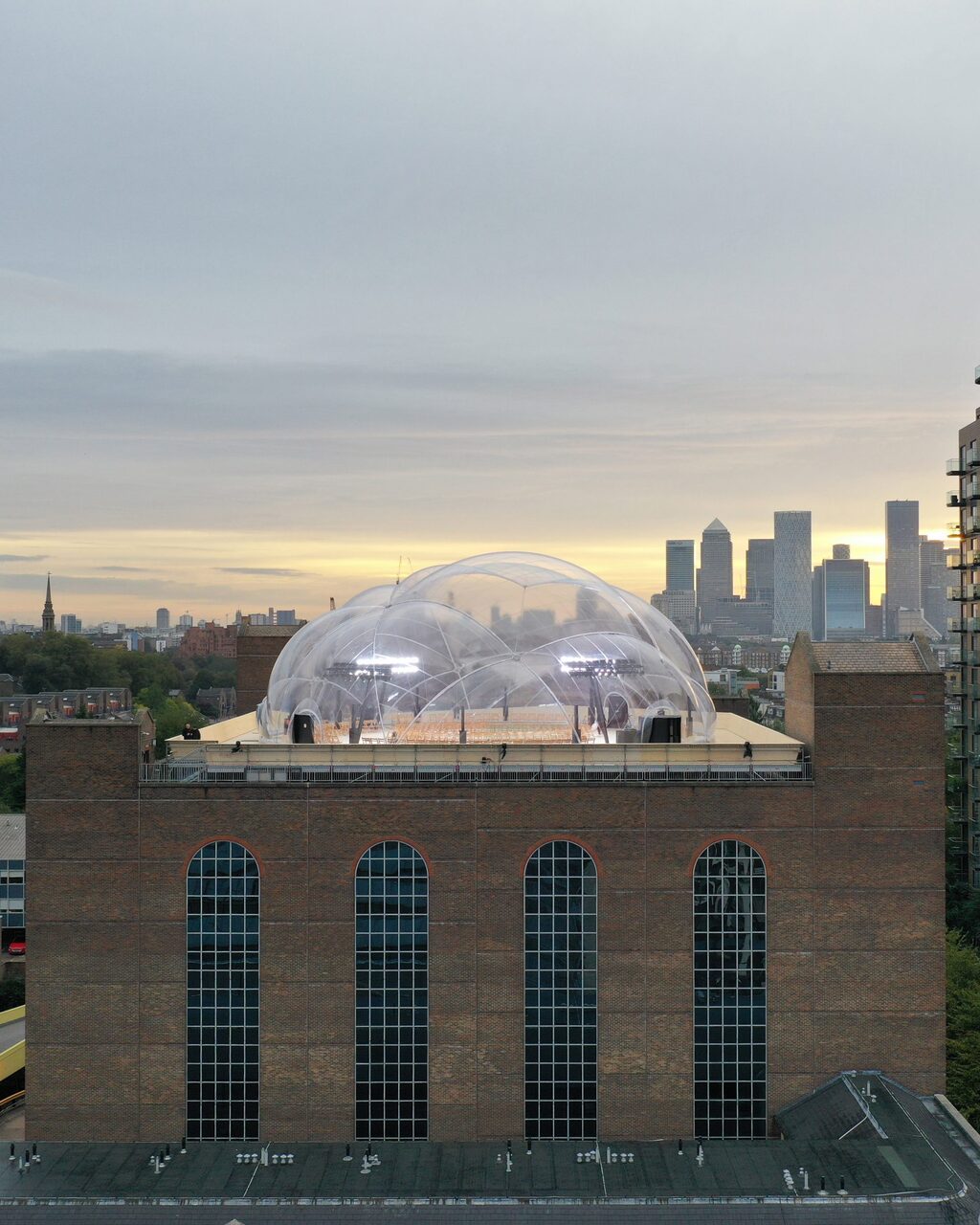 Here, the concept of storm-chasing is not only about the grandeur of the scenery, but also about feeling the suspense and excitement — about accepting the fact that we never know what will happen next. Letting go of control and being in close contact with the unexpected is to become one with the environment, to see and feel it at its fullest – to be at one with a greater reality than we are.
This ideology and principles are well shown in the design of the transparent dome. The dome structure evokes a sense of excitement and, if viewed from the lower level, evokes curiosity and caters to the concept of the unexpected.
Transparency connects users to the outside world and provides panoramic views of the beautiful sky and stunning cityscape of London. The bubble-like exhibition space, which closes and exposes its visitors to the outside world, urges them to reach and capture the clear capital skyline, combining antagonistic aspects such as restriction and freedom, city and natural environment, indoors and outdoors.

Inflatable structures first emerged in the 1960s as a way to express dissatisfaction with traditional cultural norms about lifestyle, work, and society. They were seen as potentially revolutionary buildings that allowed the exploration of space in an attempt to influence social, cognitive, and physical thinking through architecture.
What followed in “Inflatotecture” marked the revolutionary era, which saw it as a way to present a variety of opinions and innovations while using lighter, stronger, and newer building techniques.
The inflatable structures on display examine current architectural and design initiatives, such as livable spaces and art installations, as well as the many unusual materials and shapes used in their creation.
Inflatable structures are often revolutionary, artistic, and imbued with social, cultural, or environmental meaning. They are, by definition, a representation of progress; Rethink old forms. 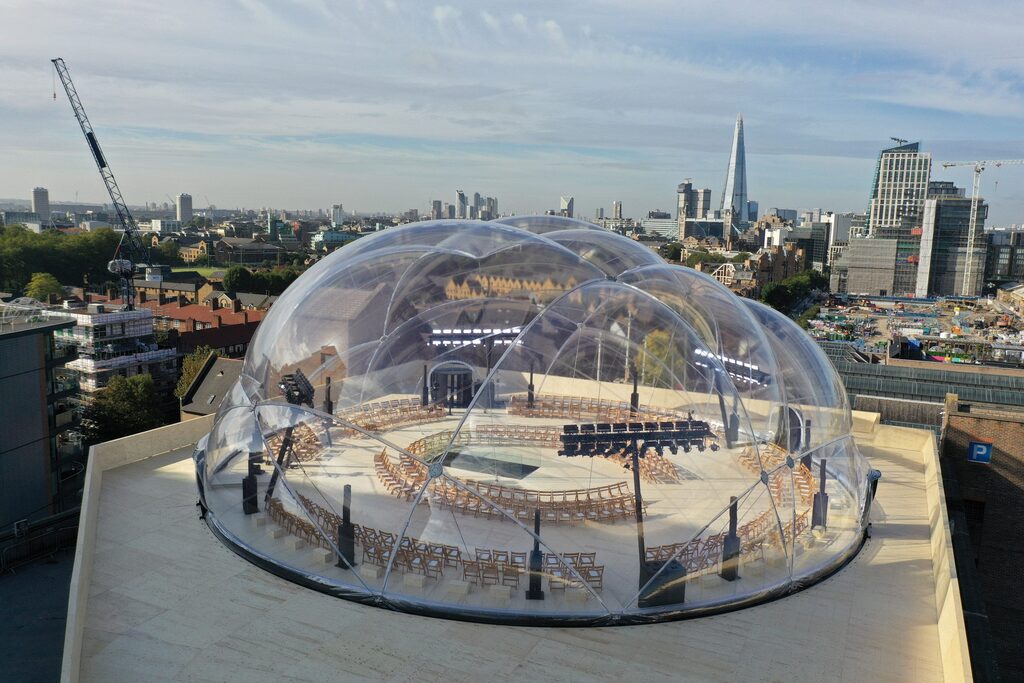 The transparent dome of Smiljan Radic is a representation of current architectural design trends, facilitates evolving creative activity, and serves as a symbol of technical updates. The exhibition space was created to be easily disassembled, moved, and repurposed for a variety of purposes, including educational and cultural events.
This design is an outstanding example of sensitive architecture that establishes a relationship between the built environment and nature. The designer’s thinking enabled the team to achieve a product that complements the designs on display in the gallery.
The fashion concept of the sky is shown very well with the architectural language of the overgrown architecture offering clear views of nature. This design depicts the deep relationship between the two design industries. It shows how architecture can be adopted to improve fashion or vice versa.
The unique architectural approach provides a comfortable display space that provides a great user experience. The model presents the experience of being in a bubble in the form of a cloud and connects users to the natural and architectural world through its transparency.